FORT LAUDERDALE, Florida (CNN) -- A Fort Lauderdale nurse has resigned and more than 1,800 patients have been notified that they may have been exposed to diseases such as HIV and hepatitis, after the nurse allegedly admitted to the hospital that she used disposable IV equipment on multiple patients, a violation of safety standards. 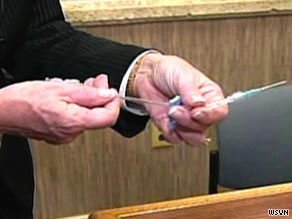 Fort Lauderdale Police are investigating to determine whether any crimes were committed after an anonymous caller reported seeing the nurse use the same saline bag and a portion of tubing more than once, during adult cardiac chemical stress tests.

The hospital, Broward General Medical Center, said that a review of the nurse was conducted when administering intravenous fluids during the stress tests and that she was suspended pending the outcome of a full investigation. The nurse subsequently resigned, according to the hospital.

Police have identified the nurse as Qui Lan of Fort Lauderdale.

On Friday, an attorney for Lan told CNN: "Ms. Qui Lan has been a registered nurse for over 37 years providing excellent medical care to all of her patients. She has an excellent reputation in the medical community due to her professionalism and ethical manner. We are confident that once the facts surrounding this incident are revealed, Ms. Qui Lan will continue to be seen in the same light."

"She's not a suspect," said police Sgt. Frank Sousa. "We don't have a crime at this point....If any victims come forward, we're going to investigate." Police have not released an incident report.

"It's heartbreaking to every employee here," said Cathy Meyer, a spokeswoman for Broward General Medical Center.

"She was aware that she was doing this. It's no different than changing a sheet, or a BandAid. This is what nurses go into nursing school for," Meyer said.

"It's a violation of standard nursing infection control procedures," she said. "It's a universal, standard policy which was violated."

The hospital says a review of medical files from the nurse's date of employment, January 2004, until today identified 1,851 patients to whom the nurse administered cardiac chemical tests. These patients are being urged to get tested for the hepatitis B and C virus, and HIV.

Alice Taylor, the hospital's chief operating officer, said the nurse admitted to a hospital investigator that she should have used new equipment for each patient. When asked why she didn't, the nurse did not respond, Taylor said, through a spokesperson.

"She admitted to inconsistencies in replacing the saline bag," Taylor said.

A cardiac chemical stress test is designed for people who cannot tolerate a traditional stress test, which involves walking on a treadmill with electrodes attached to their body.

So, the chemical test is performed, using specific medicines that increase the heart beat as if the person were exercising. It was during this intravenous process that saline bags and tubing were allegedly used more than once, according to the anonymous individual. The hospital believes the risk of exposure is low but said it's important for patients to be tested and will pay all necessary costs.

"This is an individual's unacceptable practice that once discovered was immediately corrected," said James Thaw, CEO of Broward General Medical Center, in a written statement.

As of Tuesday morning, the hospital had already received more than 600 calls and had counseled 30 people inside the hospital.

"It's prudent for our hospital to go into an investigation and notify every patient. We took a conservative approach," said Meyer, the hospital spokesperson.

But whether the nurse's actions result in criminal charges remains to be seen. The police have sealed the incident report and have not yet interviewed the nurse. "We are investigating to see whether or not there was a crime that was committed," said Sgt. Frank Sousa of the Fort Lauderdale Police Department.

In the meantime, a 24-hour patient hotline has been established. The hospital asks concerned patients to call 800-545-5716, or go to their Web site at www.browardhealth.org/patientnotice/#.

All About Nursing • Hepatitis • HIV and AIDS