(CNN) -- From motorcycles to lawnmowers, life is full of noise, but new research shows that it presents a bigger danger for some people than others. 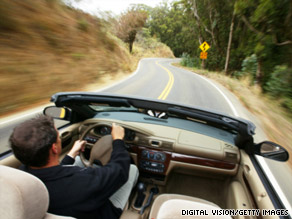 Driving a convertible for long periods of time may put you at risk for hearing loss, a study said.

A study of more than 5,000 people in the United States aged 20 to 69 found that males were three times as likely to have noise-related hearing loss as women. The research was recently presented at the annual meeting of the American Academy of Otolaryngology -- Head and Neck Surgery in San Diego, California.

Occupational and recreational noise exposure, as well as service in the armed forces, are likely explanations for why men are at greater risk, said Dr. Hamid Djalilian of the University of California, Irvine, Medical Center, who collaborated on the research.

While the study did not focus on specific root causes, anecdotally Djalilian sees patients whose hearing problems most likely stem from music at concerts or night clubs, or outdoor activities with "powered instrumentation" such as chain saws and motorcycles.

Listen to sounds at different levels »

Dr. Douglas Mattox, professor of otolaryngology at Emory University School of Medicine, who was not involved in the study, agreed. People who regularly use leaf-blowers, lawnmowers and other noisy machinery are at increased risk of noise-induced hearing loss, he said. Activities such as hunting and motorcycle-riding, which men typically do more than women, also create high levels of noise that may impair hearing.

But Djalilian noted that hearing loss depends on both duration and loudness -- you would need to be exposed to a lawnmower for several hours in a row before it did significant damage, whereas "a very loud sound such as a gunshot can cause noise-induced hearing loss even for a fraction of a second," he said.

If you are concerned about losing your hearing while doing a noisy activity, wear earplugs, experts say.

Sound travels in the ear as vibrations of air molecules. The inner ear contains a bone structure called the cochlea, which has a fluid that moves in response to these vibrations. Hair cells in the cochlea help convert vibrations into signals that get transmitted to the brain.

Loud sounds, especially sudden ones, may cause those hair cells to die, experts say.

"Noise-induced hearing loss is the number one preventable kind of hearing loss," Mattox said. "We're all born with 20,000 inner hair cells on each side of the head, and those are a non-renewable resource, and they never come back every time one is lost."

Sustained hearing loss will produce activity in the brain cells that creates the sensation of "ringing" in the ears -- for example, after a loud concert, Djalilian said. Some of that damage is temporary, but a small portion is permanent, and these permanent losses accumulate over time, he said.

"You're losing cells a few at a time, and you get to a point where there are few cells doing the work of what many cells were doing before," he said.

Roll the windows up

People who drive convertibles may also have a buzzing noise in their ears after driving for several hours, said Dr. Philip Michael, an ear, nose and throat surgeon at the Worcestershire Royal Hospital in the United Kingdom, who also presented research at the meeting.

"The likelihood is that, for short trips, you're not really going to do much," he said. "But if you're spending the whole summer driving around with your top down on a highway, then doing that on a regular basis increases your chances."

Michael and colleagues measured the volume of noise while driving seven convertible cars, each manufactured by a different company, spanning the spectrum from low to high cost. While this sample was too small for formal analysis, the data indicated a general trend toward higher noise exposure as the speed of the vehicle increased.

On average, Michael and colleagues found a sound level of 87 to 89 decibels, which is slightly above the government-set safe limit of 85 decibels. Read more sound guidelines from the National Institute for Occupational Safety and Health

Convertible drivers can reduce the risk of hearing loss by simply putting the windows up, said Michael, who drives a convertible himself.

The ethnic differences cited in the study could have to do with genetic predisposition, but that connection has yet to be defined, Mattox said. He noted that for ear infections, Native Americans have a high rate, whites have a moderate rate and blacks have the lowest rates, but "no one has come up with a gene that explains that," he said.

Researchers also have yet to figure out why marital status would play a role, Djalilian said.

It is true, however, that people tend to lose ability to hear at the higher frequencies as they age, said Dr. Anthony Bared of the University of Miami Medical Center, who was not involved with the study. That means people with age-related hearing loss sometimes have a harder time hearing high-pitched voices, like women's and children's, than the lower-pitched voices of men. In speech generally, consonants have higher frequencies than vowels, making conversations difficult to hear for some elderly people.

Researchers used data from the National Health and Nutrition Examination Surveys from 1999 to 2004.

"One of the points that people don't understand is that the intellectual content of the noise is irrelevant in terms of the damage it does to the ear," Mattox said. "Beethoven is just as bad for your ears as a jackhammer is."

Some preliminary data suggest that people can do damage to their hearing with portable audio devices such as iPods, experts said, but more research needs to be done.

Other research presented at the conference looked at a genetic link for age-related hearing loss. This type of hearing loss may result from exposure to loud noises over many years of a person's life, but a multitude of other factors may also play into it.

Researchers found that people with genetic mutation of anti-oxidant enzymes had three times the risk of having age-related hearing loss.

It's important to know your family history, said Bared, lead author of the study. If either your father or mother had age-related hearing loss, you might want to see an otolaryngologist before age 40.

Hearing aid devices are the only interventions that have been proven effective to restore hearing after it has been lost, he said.

All About Hearing Loss and Deafness