(CNN) -- At the beginning of the school year, a couple of hundred parents, myself included, gathered in the middle school lounge for the principal's back-to-school speech. The chatting hushed as the principal walked from the back of the room to the podium. As she proceeded down the aisle, parting the crowd of parents, she carried with her the biggest bottle of hand sanitizer I've ever seen. 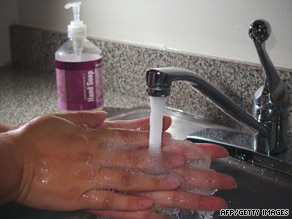 Expert: Washing hands works well to prevent many diseases, but it's not very helpful agains the flu virus.

When she arrived at the front of the room, the principal, all 5 feet and 100 pounds of her, used every bit of her strength to hoist the giant jug onto the lectern.

"Welcome back to school," she said. "Swine flu stops here."

The principal explained that between each and every class, the teachers would supervise the children while they sanitized their hands. In addition, students would be washing and sanitizing their hands at other times, such as before lunch and snack.

My eldest daughter confirmed that they really were cleaning their hands at least every 45 minutes, but exactly eight days later, the e-mails started to arrive: a case of suspected H1N1 flu in the seventh grade, another in kindergarten, and then another and another. At one point at my daughters' school, they were sending home a dozen students a day sick with symptoms of H1N1 flu.

A sneeze in the theater versus a germy handshake

What happened here? How come with all that hand washing so many children still became ill?

According to some experts, you can wash your hands all you want, and it won't do much to stop the spread of influenza, including the H1N1 variety.

"Washing hands really is wonderful for preventing many diseases, such as the common cold, but it's not very helpful to prevent influenza," said Arthur Reingold, professor of epidemiology at the University of California-Berkeley.

I gave Reingold two scenarios. The first: I'm sitting in a movie theater next to -- but not touching -- someone with H1N1, and he sneezes and doesn't cover his mouth. The second: Someone with H1N1 rubs his nose, shakes my hand, and then I rub my nose. In which situation am I more likely to catch the flu?

That's easy, said Reingold, an infectious disease specialist who advises on vaccine policy for the World Health Organization. The theater incident is much more likely -- much, much more likely, he said -- to give me the flu, since inhaling particles results in a bigger dose of the virus.

A spokesman for the Centers for Disease Control and Prevention agrees there isn't strong evidence that hand washing fights H1N1.

"We don't have solid data on the effect that hand washing has on the transmission of H1N1," CDC spokesman Tom Skinner wrote in an e-mail.

But he said there's still reason to be vigilant about hand washing. "There are studies that show hand washing was effective in reducing transmission of other respiratory diseases," he said.

Dr. Peter Palese, a professor of medicine and infectious diseases at Mount Sinai School of Medicine in New York City, said hand washing isn't all that helpful against the flu because the flu isn't like other respiratory diseases.

"The flu virus isn't very stable on the hand," he said. "The virus has a lipid membrane that flattens out when it's on your hand, and it gets inactivated."

The rhinovirus, on the other hand, which causes the common cold, can live quite nicely on someone's hand. "It has a different architecture than a flu virus," he said. "It's much more stable."

The flu virus thrives in droplets of water, such as the kind that come out of your mouth when you sneeze or cough. "The lipid membrane stays intact when it's surrounded by a droplet of water that's ten times bigger than the virus itself," Palese says.

Infectious disease experts and the CDC agree the flu is more likely to be transmitted through airborne particles than through hand contact. However, they disagreed on the extent to which flu is caused by hand contact compared with inhalation of particles.

Mark Nicas, an adjunct professor at the University of California-Berkeley School of Public Health, thinks a significant number of flu cases do indeed spread from hands touching one another. "I think that hand contact accounts for maybe one-third of influenza infections," he said.

Hand washing: A false sense of security from H1N1?

Some infectious disease experts said they're concerned messages from the CDC to wash hands to prevent H1N1 have given people too much faith in hand washing.

"Everyone's eager to promote hand washing, and certainly it won't do any harm, but to rely on a hand washing as a way to prevent influenza is a serious mistake," said Reingold.

"Don't kid yourself that you're going to protect yourself from the flu completely by washing your hands," said Arnold Monto, a professor of epidemiology at the University of Michigan School of Public Health.

The CDC has emphasized other prevention techniques, such as vaccination, as well, Skinner said. "CDC has communicated from the get-go that hand washing is only one tool in the toolbox used to prevent the transmission of influenza," he said.

This brings me back to my experience at my daughters' school. The e-mails from the principal said some of the sick children reported to the school nurse that they'd woken up ill, but their parents sent them to school anyway.

What's up with that? If your child is sick, keep her at home. If you're sick, don't go to work. Using that particular tool in the toolbox will go a long way toward stemming the spread of H1N1 flu -- probably more than washing your hands.

CNN's Sharisse Scineaux and Jennifer Pifer-Bixler contributed to this report.