WASHINGTON (CNN) -- There will be more than enough doses of the H1N1 vaccine to go around in the United States, Health and Human Services Secretary Kathleen Sebelius said Thursday. 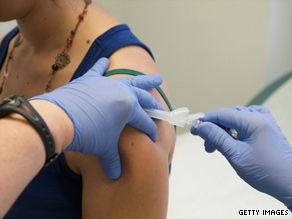 According to a CNN/Opinion Corp. poll in August, 66 percent of Americans plan to get H1N1 vaccine.

She said that at least 6 million doses of the vaccine will be available in the United States during the first week of October.

"The notion that because target groups are supposed to get it first, that there won't be enough, that we're leaving people behind, needs to be corrected," Sebelius said at a White House briefing.

There "will be plenty of vaccine for everyone who wants it," she said. She said 250 million doses have been purchased, and "that will be plenty."

Most of the initial doses available in October will be FluMist nasal spray. It is approved only for healthy individuals between the ages of 2 and 49. Pregnant women are not allowed to get this type of vaccine because it contains a live virus.

Ten to 20 million doses of the vaccine will be available each week after the first week in October, Sebelius said.

Sebelius aimed to dispel another myth: that the vaccine will be too expensive.

"The vaccine is paid for by the federal government," she said.

"The vaccine itself will be free, although some providers may charge an administrative fee. We're asking people not to do that, and private health plans say they won't charge a fee, and a lot of providers are saying they won't charge. They understand charging a fee would be a barrier, and they say they want to lower the barriers."

The federal government has asked the states to determine the best way to distribute the vaccine, and the government will get the vaccine to various locations.

"We will drive the vaccine to that site," Sebelius said, adding that 90,000 sites have been identified.

Both Sebelius and Dr. Anne Schuchat of the Centers for Disease Control and Prevention urged pregnant women to get a vaccine shot.

According to a CNN/Opinion Corp. poll released in late August, 66 percent of Americans plan to be vaccinated against H1N1 flu.

Also Thursday, the World Health Organization said manufacturers would be able to produce 3 billion doses of H1N1 vaccine over the course of a year.

The WHO said early data from clinical trials suggest that a single dose of the vaccine will be sufficient for healthy adults and older children.

However, the WHO said on its Web site that "these supplies will still be inadequate to cover a world population of 6.8 billion people in which virtually everyone is susceptible to infection by a new and readily contagious virus."

Dr. Marie-Paule Kieny, director of the WHO's Initiative for Vaccine Research, said that nine countries, including the United States, have offered to donate vaccines for use in developing countries and that the WHO will be coordinating the distribution.

She said Thursday that distribution was expected to begin by the end of October.

The WHO recommends that health workers be vaccinated first, she said.

CNN's Elizabeth Cohen and Val Willingham contributed to this report.