LONDON, England (CNN) -- Every day thousands of girls endure forced circumcision. It's a controversial cultural tradition common in parts of Africa, South America, Middle East and Asia and that regularly results in infection and even death. 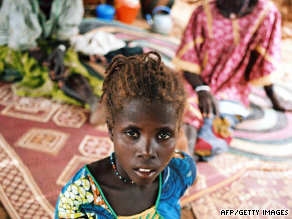 Young girls like this one in Niger are often forced into circumcision by their families.

The health dangers involved in this procedure, also known as female genital mutilation (FGM), are increasingly well-known and have lead to international efforts to ban the practice.

FGM is also the topic of the forthcoming film "Desert Flower," the true story of Somalian supermodel Waris Dirie.

The film, released later this month, tells the story of Dirie and her struggle with her own circumcision at the age of five. A former Bond Girl, Dirie has become a leading voice campaigning against FGM.

As traumatic as the physical consequences may be, victims say severe psychological and sexual problems also often develop from FGM that deserve attention too.

One Senegalese woman who was cut as a young girl describes living with FGM as a "wound that tortures me everyday of my life."

But a new treatment pioneered by a French doctor, Pierre Foldes, offers hope for victims of this practice.

"I met a population of women suffering from mutilation. Some of them asked me if I could fix things that were painful," he explained, referring to scar tissue that frequently develops over the clitoris.

"When I came back to France I realized there was absolutely no data on this, no technique."

Since then Foldes has developed a simple reconstructive procedure that removes the painful tissue and actually reconstructs the clitoris by cutting the ligaments to expose the original root.

After six to eight weeks, he says the area begins to appear normal. After six months feeling begins to come back.

"The results are getting better and better," Foldes told CNN. "72 to 75 percent [of patients] are back to normal sexuality after 18 months.

"We are working very hard on the evolution of the program and are involved in treating patients for up to two years," said Foldes, who currently operates on 80-100 women each month at a hospital outside Paris.

"The surgical procedure is only a small part of the whole problem. We have a whole team with psychologists that follow up with patients for months."

Dr. Foldes estimates he has operated on more than 3,000 women at his hospital in France. Because female genital mutilation is a crime in France, Dr. Foldes was able to get the French public health system to reimburse the cost of the operation and now roughly 70 percent of his patients receive treatment for free.

"It's like a rape," Foldes says, comparing the brutality and trauma involved in female circumcision. "It's very important to deal with the aggression and emotions to progressively get back to normal sexuality."

Over the years Foldes says has encountered some steep resistance against his work and has even received multiple death threats.

According to him, the threats "are coming from radical Islamic people," and that more than once men have come to his office with knives, but he will not be deterred.

An estimated 130 million women have undergone female circumcision. The procedure is typically performed in unsanitary conditions and often results in infections and fistula, an open wound that can develop in victims of FGM between the vagina and the anus after a failed childbirth.

Increasingly international organizations and governments are working to ban FGM, despite protests from religious and cultural groups hoping to defend the practice.