(CNN) -- Over this past week, I had some interesting conversations with colleagues who are also health care professionals. These conversations usually start with, "You know what I hate about the media ... ?" 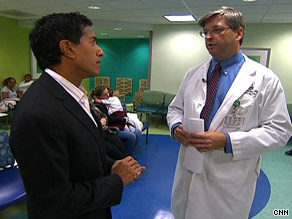 Now, over the past eight years, I have grown accustomed to being engaged in these sort of discussions where I am asked about everything the "media" have reported over the past few months, and asked to defend things point by point. It can be a challenging task.

This time, however, the topic was H1N1, or swine flu.

I spent the weekend thinking about what I was being told, and realized there was a larger point here.

People were scared, more than I had seen in a long time. And, health care professionals were blaming the media -- accusing them of being alarmist.

So, I decided to get away from the studio, away from the talking heads discussing mortality rates, and away from the hypothetical discussions about what might or might not happen. I wanted to see for myself what was happening in emergency rooms right now.

I was most curious about pediatric ERs, because young people seem to be most affected by this, and selfishly, I was curious about my own three girls and how I should react if they become ill this fall.

In short, I wanted to create a parents' guide to dealing with the swine flu that is based on the best science and my interviews with experts all over the country. In Depth: H1N1 flu

First off, there is no question that pediatric emergency rooms are much busier than this time last year -- about two to three times busier at the ER I visited.

Many of the patients sitting in the waiting room were there with flu-like symptoms, worried about H1N1.

The doctor who met me started by saying he was giving the media a C+ in its overall coverage of H1N1, and blamed his busy ER, in part, on the media for stoking fears.

"Fair enough," I answered back, "but, how do I get to an A?" In order to get there, I wanted to report clear, concise answers about what a parent should do with a sick child. So, here we go.

Point 1. As things stand now, the vast majority of children who develop flu-like symptoms this fall will have a few miserable days, and nothing more. And those days are best spent at home -- not in the ER or a doctor's office.

Point 2. If you are worried, you should call your pediatrician's office first. Don't take your child in without calling. Two reasons: Your child may not have H1N1, but could become exposed by being around sick children. And, after several hours of waiting, you are still likely to be told the basics -- plenty of fluids, rest and dose-appropriate acetaminophen for a fever. After all, it is still the flu we are talking about.

Point 3. One doctor told me a way to think about things that was helpful. He said "remove the term H1N1 from the equation." If your child had regular flu, would you take him to the hospital? If the answer is no, then don't take him/her to the hospital now.

Point 4. Yes, hearing between 30,000 and 90,000 could die from H1N1 is scary, but keep in mind -- around 40,000 people die from the regular or seasonal flu every year. The numbers may not be that much different, yet there is not panic about the regular flu. As things look now, H1N1 is causing only mild to moderate illness, not the widespread deaths people are worried about.

Point 5. There are some children who should be seen by their doctor. Call your doctor if:

• A baby younger than 12 weeks has a fever greater than 100.4 degrees Fahrenheit

• A child, older than 12 weeks has a fever for three days

• A child cannot speak while trying to breathe

• Has a blue or dark purple color to the nail beds, lips or gums

One point that was reinforced to me over and over again by the pediatricians is the best place for a sick child is at home. And, with regard to school -- after 24 fever-free hours without the aid of medications, he or she can go back.

This is the advice that my wife and I will be following this fall for our own children. Hope it is helpful to you, and the media can score an "A," at least this time around.

All About Swine Flu • Children's Health