Besides kissing and tasting, tongue can drive and help see

(CNN) -- It's not just for French kissing or for showing your dissatisfaction. 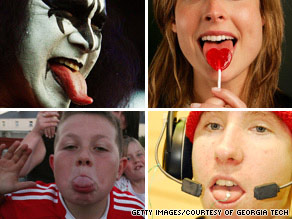 Besides showing off at concerts, licking lollipops, and teasing, the tongue could help people gain mobility.

Aside from everyday functions of chewing, swallowing, talking and tasting, the tongue has new uses such as steering wheelchairs and helping blind people see. Also in Spain last month, doctors transplanted a tongue as part of a face transplant surgery.

"The tongue is considered very much like the trunk of an elephant or the tentacle of the octopus. It's the same kind of structure with how many shapes, configurations the trunk or tentacle can assume," said E. Fiona Bailey, an assistant professor of physiology at The University of Arizona in Tucson. "Researchers realize there is a lot of potential there."

A team of surgeons in Spain last month performed a face transplant, which is considered the first to include the tongue and jaws.

A 43-year-old man who lost his jaws and tongue after a cancer battle 11 years ago received a transplant for the bottom third of his face, according to the Hospital La Fe in Valencia, Spain. Dr. Pedro Cavadas, the surgical team leader, said the objective was for the patient to recover feeling in his face and also to swallow, talk, feel and taste with his tongue again.

But the first tongue transplant in 2003 had short-lived results. Doctors in Austria transplanted a tongue to a 42-year-old cancer patient. The cancer returned and the patient died 13 months after the surgery, according to a 2008 article written by his doctors in the journal Transplantation.

A transplant recipient has to take immune suppressing drugs so he or she won't reject the new organ. But this puts the person at risk for cancer recurrence because of the weakened immune system, said Dr. Douglas Chepeha, a head and neck surgical oncologist at the University of Michigan Comprehensive Cancer Center in Ann Arbor.

Unlike liver or kidney transplants, reconnecting the tongue is also more complex because of its nerves, said Chepeha, who is the director of the microvascular program.

"A nerve is not like a single wire in your house," he said. "When we say a nerve, there are literally thousands if not hundred thousands of tiny little fibers. It'll be like taking a fiber optic cable and cutting it -- let's say that cable had 100,000 fibers in it -- how do you realign it?"

Chepeha said: "If we can get some way of knowing which way to hook the nerves up, someday it'll work better. Right now, we're not there."

A new kind of wheelchair allows people who cannot use their hands and feet to steer using simple tongue movements. This technology can assist people who have spinal cord injuries, said Maysam Ghovanloo, an assistant professor in the School of Electrical and Computer Engineering at the Georgia Institute of Technology.

Unlike hands and feet, the tongue has a distinct advantage because it doesn't connect to the spinal cord, he said.

"The tongue is always moving, but the technology is smart enough to tell the difference between natural movements and the tongue movements [meant to steer the wheelchair]," Ghovanloo said.

Researchers conducted clinical trials this summer in which people with spinal cord injuries navigated through an obstacle course using their tongues. Those who had recently been injured were more receptive to driving with their tongues than others who have gotten used to the existing technology, Ghovanloo said.

The tongue-driven wheelchair is not available to the public yet, pending more clinical trials in 2010.

Researchers devised an instrument to allow users to "see" through the tongue. Called the BrainPort, the vision device sits on the tongue to help blind people get a sense of their environment.

The device, which is the size of a postage stamp, connects to a digital video camera. The camera paints the visual scene in front of a person by turning it into gentle stimulations on the tongue that feel like bubbles. For example, when a person moves across the room, the device creates vibrations across the tongue to resemble the movement.

Aimee Arnoldussen, a neuroscientist at the device maker's company, Wicab Inc., said scientists turned to the tongue because "the tongue has a high density of nerve endings, which makes it sensitive."

Other parts of the body, such as the back, were not sufficiently sensitive. The fingertips were sensitive enough, but people wanted full use of their hands to grip a cane or to grab objects.

Placing the device "on the tongue inside the mouth, frees the hands to interact with environment," Arnoldussen said. Plus, the device can be hidden in the mouth.

The device is still in development, but Arnoldussen said the company hopes to make it available to the public within the next year.

Scientists at the University of Illinois at Urbana-Champaign developed a handheld device the size of a business card, which can taste the sweetness in food and drinks. This could lead to the first electronic tongue that would be able to identify sources of sweetness.

"We could determine what sweetener would be in your tea," researcher Christopher Musto told CNN Radio.

The device can distinguish among 14 kinds of sweeteners, from natural sugars to artificial ones such as Splenda. Musto described two possible applications: This would be a first step toward an electronic tongue and second, it could be a handheld device that would determine what sweetener and the amount.

All About Spinal Cord Injuries • Eyesight and Eye Health