Teens' stories echo findings of survey into drug use 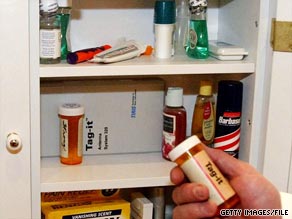 One young recovering addict said "there would always be something" in the medicine cabinet at a friend's house.

"I was shivering and I was seeing things, and my mom was playing a video game and it was just 10 times louder than it was.

"I could feel the monsters in the video game coming towards me... and I got so scared at one point that I threw up," the 17-year-old said from the Virginia drug treatment center where he lives.

He had taken LSD at age 9, and his appetite for drugs had just begun.

He and millions of youngsters in the United States have an easy time finding drugs, according to a survey The National Center on Addiction and Substance Abuse released Wednesday.

A lot more teens -- 37 percent more since 2007 -- also said that pot was easier to buy than cigarettes or beer.

The survey also says that two-thirds of high school students say drugs are used, kept or sold at their school.

"Parents are the key to raising drug-free kids, and they have the power to do it if they send their children the clear message to choose not to use and demand that the schools their children attend be drug-free," the center's chairman and founder, Joseph A. Califano, said in a statement.

The 14th annual report also says teens are more likely to get drunk and use marijuana if they see their parents drunk.

For the first time, the survey asked teens about the ease of getting prescription drugs to use for getting high. The survey found that one in five teens could get the drugs within an hour and that their own homes and friends are the most common sources.

The kind of drug use outlined in the survey can take a toll on people like Devon Kennedy, who says she started using drugs in the ninth grade.

"The first drug I did was speed," the 18-year-old said. "As soon as I tried it, it was perfect to me so I just tried everything I could after that."

Kennedy says she moved on to harder drugs like cocaine and heroin.

Jessi Danner, also 18, recalls looking for Pop Tarts at a friend's house and finding something else in the drawer.

"There's this little baggie and she's like, 'I have seen this in movies. You shove it up your nose' -- and so that's what we did.

The bag was filled with cocaine.

Cocaine would rule Danner's life for the next five years.

Buruca, Danner and Kennedy share a common bond -- all are recovering drug addicts hoping to get their young lives back on track.

The National Institute of Drug Abuse estimated in 2007 that 19.9 million Americans age 12 or older -- around 8 percent of the population -- had used illegal drugs.

Debbie Taylor sees the results of that drug use as president and CEO of Vanguard Services, a substance-abuse treatment center in Arlington.

"A child can get -- in any neighborhood, in any school -- almost any drug that they would want in a relatively short period of time. I don't think that was the case 20 years ago," she said.

Buruca, a patient at Vanguard, has been drug-free for almost four months. But for the previous five years, LSD, a mood-changing drug that can cause delusions and visual hallucinations, was his drug of choice.

"It's like I felt everything was dull. It wasn't what it should be and there's this whole other world I can go into that's just so much better and wider. Why stay in this one?" Buruca said, with his mother, Christina Tellez, sitting next to him.

Tellez had no idea her 9-year-old son was taking drugs. "He had such a great family support system around him. We were with him all the time," she said.

By the time Buruca was in the eighth grade, he says, he was using drugs daily and often had hallucinations as he entered school. "I walked in, the walls started collapsing, hallways started to shrink and I walked right back out," he said.

Tellez just thought her son had severe behavioral issues . She says no one ever warned her that Buruca could be a drug addict.

By the time Kennedy was in 10th grade, her life was spinning out of control. "I was completely strung out," she said. She says she was expelled from high school for drug possession.

Kennedy's experimentation with drugs became an addiction very quickly. "As soon as I tried it, it was done -- like, I just knew," she said. Living in a quiet suburb of Washington made matters worse.

"You live in a neighborhood where nothing dangerous is going on. You start getting bored with this mediocre life, you want something special," she said.

"Every time I went to someone's house, the first thing I said was I had to go to the bathroom and I went to the bathroom cabinets and there would always be something in there. Everywhere you went, somebody had a parent who had something," she said.

Kennedy has completed her treatment at Vanguard and has been drug free for 19 months. She attends community college.

Danner says she missed out on a lot of happy memories. "Instead of hanging out with friends, I would be locked up in my room doing lines, and that's no way to live," she said.

She is in the final phase of treatment, is attending community college and wants to be an actress one day.

Buruca said he hopes he can leave treatment soon and start his senior year of high school. The music and football fanatic offers some advice for teens curious about drugs.

"It's so detrimental to your future for a few hours of being high. And a lot of times you will get to those hard drugs like meth and heroin that will get you addicted, physically addicted, and it will just ruin your life completely," he said.

Taylor suggested parents have their pediatrician do a drug test during a normal annual physical so any problems can be caught early on.

"Children go so quickly into an adaptive and addictive phase that it's very difficult to reel them back at that point," Taylor said.

All About Drug Addiction • Methamphetamine