Freaky news about your brain may change your mind

(CNN) -- Space. Sound. Smell. Humans constantly process a slew of variables in their surroundings. According to new research, the wiring of the brain may be even more complex than we knew. 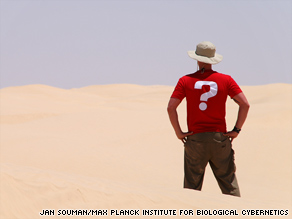 Researchers at the Max Planck Institute for Biological Cybernetics had people wander around a desert.

These studies, while small, suggest avenues of research that could change the way we think about our perception of the world:

Lost? You're not walking straight

Have you ever been lost in the woods and felt as if you were going in circles? New research in the journal Current Biology suggests that, in fact, people do tend to walk in circles if they do not have a reference point such as the sun.

"Walking in a straight line is a complicated process when you think about it from the perspective of the brain," said Jan Souman, researcher at the Max Planck Institute for Biological Cybernetics in Germany.

Their hypothesis is that, the longer people walk, their errors in relation to a straight line build up by chance to the left or right. This may result in a zigzag pattern. Over time, the tendencies to the left or right may take the person in a circle.

The researchers are now testing these principles in a virtual reality environment, with participants walking on a treadmill that allows for changes in direction.

The lesson from this study is that, if you want to walk straight, use a landmark such as a tower, mountain, or the sun to update your direction, Souman said. If it's life-threatening that you get to your destination, bring a compass or a GPS.

These navigational technologies have allowed humans to surpass the limits of their innate skills, said David Uttal, associate professor of cognitive psychology at Northwestern University, who was not involved in this research. Other animals, such as whales and Arctic terns, are born with more advanced directional skills than humans, he said.

The German study, which Uttal found "elegant and creative," illustrates how humans evolved to be good at keeping track of their orientation for short distances, but in trying to go long distances, they fail in the absence of cues such as the sun, he said. From prehistoric "ice men" getting lost in the snow to early sailors getting lost at sea, a lack of long-distance navigational skills has contributed to world history, he said.

Curiously, although the sun moves at an angle during the course of the day, people seem to inherently correct for this change, and use it to walk in a somewhat straight line, Souman said.

Some people are really bad at singing a song they've heard, and scientists are figuring out why.

The phenomenon, called tone deafness, refers to people who do poorly at distinguishing between different musical tones.

Researchers at Beth Israel Deaconess Medical Center and Harvard Medical School in Boston, Massachusetts, looked at images of the brains of 10 people who tested as being tone deaf, and 10 people who were not. Here's a tone deafness test similar to the one they used.

Previous research has shown that people with lesions in the brain pathway that connects perception and motor areas of the brain have trouble with language, said Psyche Loui, instructor in the department of neurology at Harvard University. People with damage to this area tend to have problems with repeating words they hear.

The new study in the Journal of Neuroscience also found that the pathways in this brain area, which usually have top and bottom branches, were implicated in tonal recognition. In fact, scientists could not identify a right-top branch in any of the 10 tone-deaf participants.

"The better you can tell the difference between two tones, the larger that particular brain pathway was," Loui said.

The findings do not mean there is no hope for tone deaf people, however.

"I think there's a lot of music training in general that could help enlarge these pathways," Loui said.

In fact, a treatment for tone deafness might also help people with speech disorders such as dyslexia, she said. There has been evidence that people with dyslexia have same auditory processing problems as people with tone deafness, she said. Her lab showed last year that children with musical training performed better on dyslexia tests.

On the other end of the spectrum, some people have perfect or "absolute" pitch, and can name any musical note they hear. Diana Deutsch, psychologist at the University of California, San Diego, has found people who speak "tone" languages, with words that change meaning entirely depending on tone, seem to have a greater likelihood of perfect pitch. More speakers of Mandarin and Cantonese, two tone languages, tend to have perfect pitch than English, for example, she said.

In theory, in Deutsch's view, it should be as easy to call a pitch "F" as it is to say that an object is red or blue.

"If you assume that there's something missing in our environment in terms of early exposure to the right types of sounds, and that it is bundled in with speech, then the whole thing makes sense," she said.

Take a whiff of air. What you're smelling may not be a combination of all of the things in your surroundings, but actually what only one of your nostrils detects.

New research in the journal Current Biology suggests that nostrils may actually send competing signals to the brain, and that what you think you smell isn't the whole story.

"When the nostril encounters two different scents simultaneously, the brain processes them such that we perceive predominantly one smell at a time, followed by another smell, and they alternate," said Denise Chen, assistant professor of psychology at Rice University.

Participants were presented with a rose smell and a marking pen smell at the same time, one scent per nostril.

All of the 12 people in this experiment reported perceiving some degree of alternation between smells, she said, although some experienced the phenomenon more than others.

A test like the one used in this experiment could be useful in assessing and treating people with olfactory disorders, Chen said.

Naturally, as people age, they will lose the sharpness of their sense of smell, with marked declines their 60s and 80s, Chen said. People in their 20s are among those with the best sense of smell, she said.

"Having a poor sense of smell affects quality of life," she said.