BUNNELL, Florida (CNN) -- Faith Coleman had no health insurance when she learned she had cancer, but she describes her battle with the illness as "one of the absolute greatest blessings" of her life. 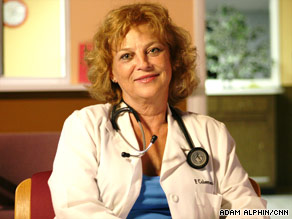 Faith Coleman's ordeal as an uninsured cancer patient drove her to help others without health insurance.

"Having kidney cancer was one of the best things that ever happened to me ... because I can truly empathize with patients," said Coleman, 54.

That compassion inspired Coleman to open a free clinic in her Florida community to help other uninsured people in need of medical care.

In July 2003, Coleman, a nurse practitioner, learned she had a malignant tumor growing on her right kidney. But as a contract worker for several doctors, she did not receive health insurance. Coleman's treatment totaled about $35,000, and she was forced to take out a mortgage on her house to help pay for it.

Realizing that her financial and health woes were not unique, Coleman -- now in remission -- became determined to help those in similar situations access medical treatment.

"I have been given another chance, and I felt that it was important for me to make a difference and to help other people," she said.

So after her recovery in 2004, Coleman approached Dr. John Canakaris. The local physician with 60 years of experience had been treating the indigent population for years. Canakaris was eager to reach more patients in need.

The two worked together to establish the Flagler County Free Clinic in Bunnell, Florida, which provides medical care for the uninsured. It has treated more than 6,700 patients.

The clinic opened its doors in February 2005, with eight volunteers treating eight patients. Since then, it has expanded to 120 volunteers who see about 80 patients every other weekend. Coleman said she's seen an increase in the number of patients at the clinic, which serves people who meet federal poverty guidelines.

"If you see 100 cars in the parking lot, that's us!" Coleman said, describing how she tells people the way to find the clinic. "We have what I call 'controlled chaos.' It's just busy, busy, busy, go, go, go."

Watch the "controlled chaos" at the clinic »

Flagler County has a 15.5 percent unemployment rate -- the highest in Florida -- according to the U.S. Bureau of Labor Statistics. Living without medical insurance often is the only way for some local struggling families to make ends meet, Coleman said.

"When your health insurance [premium] is the same or more than your mortgage payment on your home, which one do you think they're going to choose?" Coleman asked.

"They have to live. They have to eat. Insurance becomes the nebulous fairy-like thing that's flying around out here. It would be nice to have because it's silver and shiny and pretty, but it's too expensive to hold on to. So it has to go," she said.

The clinic, which operates out of a building donated by Canakaris and other doctors for use on the weekends, is not affiliated with any hospitals, Coleman said. The local Rotary Club, churches and private contributions help fund the operation. In addition, physicians volunteer to see patients recommended by the clinic, and an imaging center donates two X-rays and two CAT scans per month.

Coleman says she and her team generally treat common illnesses like diabetes, hypertension and other chronic diseases, but adds "we've also found a lot of cancers." Many diagnoses have led to life-saving treatments.

Watch Coleman interact with patients at her clinic »

"I had this lump growing in my throat on the right side and it just kept getting bigger and bigger, and I didn't have any insurance," said Franklin Dias, a cancer survivor. "Ms. Coleman called in one of her buddies who said this is an emergency ... [then] I was in the hospital."

Today, Dias is cancer-free. And to show his appreciation of the clinic, he bakes.

"She was perfect, she was precise, she was accurate," said Viera. "I'll be very grateful all my life to Ms. Coleman. She's 'Faith,' and when you have five minutes with her she makes you have faith."

Want to get involved? Check out the Flagler County Free Clinic and see how to help.

All About Health Insurance • Florida