(CNN) -- Known for building skate parks and shaping the skateboarding scene in New York, Andy Kessler, 48, died this week after an allergic reaction to an insect sting, friends and family told news media. 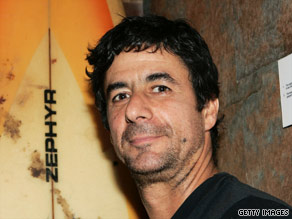 Andy Kessler, seen in 2005, reportedly died this week after suffering an allergic reaction to an insect sting.

Kessler's death is a reminder that stings can be deadly for those with an allergy to certain insects, the American Academy of Allergy, Asthma & Immunology said Friday.

At least 40 people in the United States die each year as the result of insect stings, the academy said. As many as 5 percent of Americans are at risk for a severe, potentially life-threatening allergic reaction from insect stings, according to the organization.

In a typical week in the emergency room, doctors at Emory University Hospital Midtown in Atlanta, Georgia, see about six or fewer cases of people with allergic reactions to insects, said Dr. James P. Capes, director of the emergency department.

"It's common, but not incredibly common," he said.

Typically, when stung by an insect, a person will have no reaction or a mild local reaction, such as redness, swelling or itching at the site of the sting. However, some people experience a more widespread reaction, such as a drop in blood pressure, lightheadedness or hives all over. iReport.com: Send us your allergy stories

In the most serious cases, a person can go into anaphylaxis, a condition in which he or she may have difficulty breathing. Other symptoms include swelling of the mouth or throat, itchy skin, wheezing, cough and localized pain, said Dr. Clifford Bassett, medical director of Allergy and Asthma Care of New York.

Capes advises people who experience a systemic reaction to call 911 and wait for an ambulance, because it will have medicine to treat the reaction immediately. An antihistamine such as Benadryl will be given and, in severe cases, a shot of epinephrine.

Even if the reaction is not severe, Benadryl will help with normal symptoms of insect stings, Capes said.

Those who have had allergic reactions to insects should always carry an antihistamine and an epinephrine auto-injector for emergencies, experts said.

Insect allergies may be harder to control than some food allergies because it's not always possible to predict when bees, wasps and other stinging bugs are around, Capes said.

For those who have a history of anaphylactic reactions to insects, vaccines are available for yellow jackets, wasps, honey bees and fire ants, Bassett said. The immunization process takes three to five years, he said.

There are also blood and skin tests that people can take to determine whether they are sensitive to these insects, he said.

Besides anaphylaxis, people may experience other kinds of reactions, Bassett said. If a person is stung hundreds of times at once, he or she may need emergency care, as the venom may lead to seizures, shock and even death, he said.

There is also a rare reaction called serum sickness that includes joint pain and flu-like illness that may result from insect stings, and has allergy-like symptoms, Bassett said.

In rare cases, even mosquito bites can lead to anaphylaxis, Bassett said. There is no treatment for mosquito allergies, but there is a diagnostic test, he said.

Bassett offers the following tips to reduce the danger of insects:

• Stay away from stinging insect nests when possible.

• Consider wearing closed-toed shoes in an area where there may be many stinging insects.

• Remain calm and quiet around a stinging insect, and move slowly away from it.

• Avoid loose-fitting clothing, which can accidentally trap the insect.

• Use caution when eating outdoors, especially when sodas or other sweetened drinks are available.

All About Allergies • Skateboarding