(CNN) -- As college students enter the halls of elite education and higher learning, here is one piece of advice: Learn from the caveman. 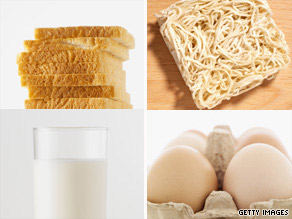 Cutting mold off bread and cheese generally isn't a good idea, since the mold could have spread through the food.

"How the caveman worked, he'd check stuff out -- the look and smell of it," said Jeff Nelken, a food safety expert, about suspicious foods. "You have a sense of smell and taste, a radar system that tells you that the food is not fresh."

A survey of more than 4,000 college students published in 2008 in the Journal of the American Dietetic Association found that "young adults, particularly white men, engage in risky eating behaviors" by consuming undercooked animal products, which carry risks of illness.

College students aren't generally known for healthy eating. Busy schedules and tight budgets -- and sometimes a lack of knowledge about food -- can result in not-the-greatest choices. Outside the dining halls, the college student diet may rely heavily on ramen noodles, beer, cereal and leftovers. Today, a few food experts offer advice on ways to balance health and frugality, since many students are new to the kitchen and crunched for cash.

Can I cut the mold off the bread/cheese and eat the rest?

It's tempting to lop off the fuzzy patch, but the mold could have spread already.

"Once you're able to see mold on bread, it means there's quite a lot of mold," said Nelken, a food consultant in Woodland Hills, California. "It's indicative that there's mold on other slices, just not at the level you can see it. Why jeopardize your health on a slice of bread?"

Nelken likened mold to jellyfish. "Even though you scrape off the head of the jellyfish, the tentacles are still in the food product."

Eating moldy bread could cause an upset stomach. Although most molds are innocuous, it's probably not going to taste good, food experts said. The U.S. Department of Agriculture Food Safety and Inspection Service recommends discarding moldy bread and baked goods, because of their porous texture.

Creamy dairy products like yogurt can easily spread mold and should be discarded. Soft cheeses with high moisture content -- including those that are shredded, sliced, or crumbled -- can be contaminated with both mold and bacteria. So throw those away, experts advise.

Hard cheeses can be saved, as long as the mold is cut 1 inch around the spot. Because of the cheese's hardness, the mold generally cannot penetrate deep into the product. Complete chart of USDA's guide on moldy food.

To save food and money, consider freezing food items to keep them longer, or buy the item in smaller amounts.

Do dry packaged foods like ramen or boxed macaroni and cheese last forever?

"Forever is a long time, but these products will last for some time," wrote Linda Harris, a researcher who focuses on microbial food safety at the University of California-Davis. "The quality will be affected by long-term storage. The flavors may change over time. The texture of the noodles might not be as good but they won't become unsafe."

Would a hungry college student searching for a cheap, convenient meal notice? That would be "highly variable depending upon storage conditions, age, product and taste sensitivity of the student," Harris said.

The pizza from last night has been sitting out on the counter. Can I eat it for breakfast?

The USDA advises no, saying that perishable foods should not be left out for more than two hours. Anything left at room temperature for longer should be discarded.

"Fridges were invented for a reason," said Sam Beattie, a food safety extension specialist at Iowa State University. "They work well to keep food cold. It slows the growth of these illness-growing microorganisms."

Leaving a box of pizza out overnight and grazing on it the next morning is something that "I think we've all done," Nelken said. "You don't hear people getting ill from leftover pizza."

But he said to steer clear of left-overnight pizza with exotic ingredients such as smoked salmon or grilled eggplant because of bacteria.

Should I drink milk after its use-by date? What about eggs?

Drinking milk a day or two after its use-by date shouldn't be an issue. But if you notice changes in flavor, consistency, smell -- don't take any chances, Nelken said.

For eggs, the USDA recommends using within three to five weeks of the date of purchase. The "sell-by" date will usually expire by then, but the eggs are safe to use.

Eggs and milk should be stored in the coldest areas of the refrigerator, not on the door, since it's four to five degrees warmer there.

Raw chicken always smells funny. How do I know if it's gone bad?

It'll smell a lot more gamy, said Beattie, an assistant professor for food safety in Ames, Iowa. This means it'll give off an odor -- stronger than when you first bought it at the grocery store.

Store chicken in the freezer or use refrigerated chicken within three days after purchase. Beyond that, spoilage organisms will get into the chicken and it will start emitting an unpleasant smell, Beattie said.

Invest in a cooking thermometer to make sure that meat has been cooked thoroughly, rather than relying on visual cues.

Wash your hands frequently with warm water and soap to avoid transmitting E.coli and salmonella.

Should I drink the water after the expiration date has passed on the bottle?

"What happens with water is absolutely nothing," Beattie said. Water is safe to drink even past its expiration date (as long as there's no leakage in the bottle), but the water may taste different.

According to the Food and Drug Administration, bottled water is considered to have an indefinite safety shelf life if it is produced and stored properly. While the federal agency does not require an expiration date for bottled water, many manufacturers elect to put expiration dates.

"What happens is that people feel more comfortable with bottled water with a code date," Beattie said. "There is no safety factor beyond that. Manufacturers feel that quality of water may deteriorate or become more neutral."

All About Food Safety • Food and Cooking