Who's your daddy? A celebrity look-alike

CNN -- First came naming babies after movie stars. Then there were copycats of celebrity outfits, Academy Award dresses and even nose jobs. Now, the celebrity chase is getting genetic. 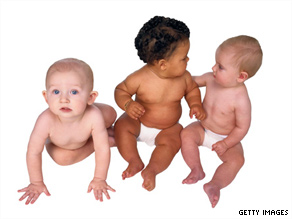 Bioethicists debate whether choosing donors who look like celebrities is a parental freedom or baby designing.

A Los Angeles, California, sperm bank links to photos of celebrities who resemble existing donors in a Web feature called Donor Look-a-Likes. This attempts to give clients an idea of what the anonymous sperm donors look like.

Donor Look-a-Likes helps answer the would-be clients' most frequently asked question about their donors, which is who do they look like, said California Cryobank's communications manager, Scott Brown.

"The goal was not to say you can have a baby that looks like Bob Saget," Brown said. "The goal was to say this donor happens to resemble this celebrity."

"Since we can't show the adult photos [of the donors], we just felt this was the next best thing we could do for people," Brown said.

California Cryobank's employees spent months sifting through the existing donor list, subjectively matching them with celebrities. A sperm donor may have a chin, eyes or some physical similarity to stars and was given two to three celebrities he resembled. The sperm bank does not charge more for specimens from a celebrity look-alike, Brown said.

The cryobank accepts less than 1 percent of the donor applicants, who go through extensive screenings that include genetic testing, blood tests, a three-generation family medical history and a sperm count.

According to the Web site: "No celebrity is meant as an exact match for any donor, nor should you assume that your future children will look like any celebrity listed." Forty percent of the sperm bank's clients are heterosexual couples with infertility issues and 60 percent are single women or gay couples.

Selecting a sperm donor usually takes about four to six weeks for prospective parents. Since Donor Look-a-Likes launched two weeks ago, it's unclear whether the feature has influenced decisions, Brown said.

"I wouldn't say anyone made a decision because of a donor look-alike. It's probably weighed into those who had already narrowed down their choices," he said. Since the look-alike feature went live, the cryobank has received more inquiries and new accounts.

The site does not contain photos, but instead links to Google images of celebrities. Ben Affleck has been the most searched celebrity since its launch.

"We're not using [celebrities] to advertise and we're not putting their picture on the Web site," Brown said. "We certainly mean them no harm. We appreciate the fact that there are public figures out there we can use to help identify our donors."

Bioethicists are divided over the program. Sperm banks routinely allow clients to search based on ethnic background, hair color, eye color and skin tone. They offer extensive details such as donors' height, weight and educational background.

"There are legitimate reasons for this, so the child fits in with the already existing children in the family or so the child looks more like the social father," said Mark Rothstein, director of the Institute for Bioethics, Health Policy and Law at the University of Louisville School of Medicine in Kentucky. "Most people would consider that to be acceptable. ... If you're creating a little Keanu Reeves, then I have problems with that."

Sperm banks do not need to identify celebrity resemblance to a male donor because it could create "unreasonable expectations" of the child, Rothstein said. "What would happen if the child [conceived from donated sperm] doesn't look like a celebrity or that look-alike?" he asked. "Would the child be treated like a failure?"

An attractive man's sperm does not guarantee that the offspring will look anything like him.

"Ultimately, people want what's best for their child," Brown said. "There are no guarantees in intelligence or looks or athleticism anytime when you're having a child with a donor or not."

Brown said the database isn't to give parents a way to give birth to mini-celebrity look-alikes.

"I don't think people who are serious about this are trying to find a specific donor who looks like a certain celebrity," he said. "They want to get a sense of who that donor is."

Bonnie Steinbock, professor of philosophy who specializes in bioethics at the University at Albany in New York, said it magnifies the superficiality in society. "There's something strange about a culture that has stratified rigid types of beauty where everyone looks alike. Now they're trying to create children through who the [actor] of the moment is."

Ronald Green, a professor for the Study of Ethics and Human Values and director of the Ethics Institute at Dartmouth College in Hanover, New Hampshire, found Donor Look-a-Likes "silly, but not ethically serious."

"It's a clever marketing technique in a competitive industry," he said. Since Donor Look-a-Likes' debut, the sperm bank has generated about six times its usual Web traffic.

Green said choosing sperm based on celebrity look-alikes may seem superficial, but so are other aspects of social interactions.

"When people go looking for a mate, they start superficially," he said. "Who's the person he approaches at the bar? Who's she willing to have sit down next to her? It's not based on deep things. We've been designing babies since we climbed out of the cave. We do that in mate selection."

Parents have a basic desire to give their child the best start, in appearance, health, height, intelligence since research has shown that taller, more attractive people get an edge, he said.

The sperm bank's celebrity feature is the "progress of science combined with fashion," Green said. "Call it as silly or serious as fashion."

All About Infertility • Pregnancy and Childbirth