(CNN) -- Surgeons at two Washington hospitals have performed seven kidney transplants involving 14 recipients and donors who did not match, using a process that virtually eliminates the chances of organ rejection. 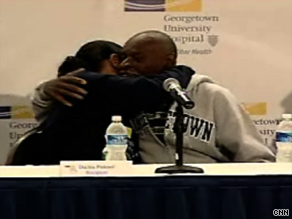 Donor Larry McPhatter, 59, gets a hug from the recipient of his kidney, Dachia Pinkard, 39.

The process, called plasmapheresis, can make it easier for underserved African-American patients to receive organs for transplant. Of the 80,000 people on the kidney transplant list, 36 percent are African-Americans but only 15 percent of living donor kidneys go to African-Americans. That discrepancy is caused, in large part, by a lack of suitable matching organs, the U.S. Department of Health and Human Services says. As a rule, people are genetically more similar to others who share their ethnicity or race than to people of other races.

Although minorities typically donate in proportion to their percentage of the population, they have greater needs for transplants because of diseases that are more prevalent in some ethnic or racial groups. African-Americans, Asian and Pacific Islanders and Latinos, for example, are three times more likely than Caucasians to have kidney disease, the health department says.

The transplants were performed at Georgetown University Hospital and Washington Hospital Center over a four-day period in July.

The patients and donors met Wednesday -- some for the first time -- at a news conference at the Georgetown hospital.

The transplant teams were led by Dr. Keith Melancon, director of the kidney and pancreas transplant program at Georgetown University Hospital, and Dr. Jimmy Light, director of transplantation services at Washington Hospital Center.

"Isn't this amazing stuff?" Light said at the news conference, adding later that the "real heroes here are the donors."

Watch more on the 14-person transplant »

By using plasmapheresis, or plasma exchange, all seven patients were able to match closely enough with their donors to allow the transplants. In plasmapheresis, a machine removes antibodies from a patient's blood that can cause organ rejection.

The kidney recipients were in a "highly sensitized" state, which means their immune systems were on high alert and extremely likely to reject a transplant. As a result, Melancon said, the patients practically had no chance of finding a suitable donor.

All of the patients were on kidney dialysis until the transplants.

The patients also underwent two rounds of plasmapheresis before the surgery and two rounds afterward.

One patient remained hospitalized Wednesday but is expected to be released next week, Melancon told CNN.

Six of the seven kidney recipients are African-American, as are five of the seven donors. The two Caucasian donors, a 29-year-old graduate student and a 60-year-old Catholic pastoral counselor, had no connection with the recipients.

The other five donors were a spouse, a cousin, a brother, a sister and a friend of the recipients, Melancon said. But the donors did not necessarily give their kidneys to their relatives or friend. Who received which kidney from whom was determined by who was the best match.

Although minority donors tend to match better with minority recipients because of genetic similarities, the best match for the Caucasian recipient was an African-American donor, Melancon said.

Kidney transplant patients typically stay in the hospital for about eight days after surgery. Because of the need for heightened immunosuppressant therapy and plasmapheresis, the patients in the Washington surgeries also were hospitalized for a week before the transplants.

The use of plasmapheresis is significant, Melancon said, because it increases the chances of African-Americans to receive life-saving organs. Plasmapheresis has been used in transplant surgery for about 10 years, the doctor said.

The Washington area, which has a large African-American population, also has the highest rate of end-stage kidney failure in the United States, hospital officials said.

Patients who have been pregnant or have had prior transplants or blood transfusions also are more sensitized.

African-Americans in general are more sensitized but scientists don't know exactly why, Melancon said. The surgeon said he believes it's because many African-Americans' ancestors came from sub-Saharan Africa, where they were subjected to more infectious agents than, say, people in Europe. That could have sensitized Africans' immune system to more antigens, he said.

In the Washington area, most minority patients wait five years or longer for a transplant, Melancon said.

All About African-American Issues • Kidney Failure