LONDON, England (CNN) -- Ali Herbert has spent the last seven months being "a walking blood bank" aboard one of the the world's largest hospital ships. 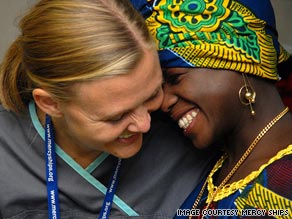 The 50-year-old nurse and grandmother from the UK resigned from her position in a hospital to volunteer aboard a ship that provides free medical treatment to some of the world's poorest people.

Like any of the 450 volunteer crew members currently aboard the Africa Mercy, Herbert can be called on at any time of the day to give blood, as the ship has no facilities for storing blood products.

Instead the ship operates a system where there are usually 30 donors for each blood type.

Herbert says she recently helped a young woman who needed an amputation.

"This young woman required a below-the-knee amputation, but was very weak so I was called in to give her blood as our blood groups matched," she told CNN.

"It was an amazing experience because two minutes after giving my blood, I saw it go straight into her arm. In the UK you have no idea what happens with your blood," she added.

The "Africa Mercy," currently docked off the coast of Benin, West Africa, also operates as a floating hospital with medical facilities including six state-of-the-art operating theaters, an ophthalmic unit, two CT scanners and 78 hospital beds onboard.

The Mercy Ships charity began in 1978 and since then has been credited with providing medical services valued at $748 million, performing more than 41,000 operations and impacting approximately two million people.

Mercy Ships CEO Samuel Smith says the charity has been able to help so many people through what he calls a "unique business model."

Thousands of volunteers join the ship every year, and they not only do it for free but also have to pay for accommodation aboard the vessels; some like Herbert, pay around $600 a month.

See more images of volunteers onboard the ship »

"This allows almost all our resources to go into state-of-the-art medical facilities," Smith told CNN.

It costs about $1.25 million every month to maintain, has three wards and a small intensive care unit operated by top surgeons from around the world.

Would you give up your holiday to volunteer on the hospital ship? Sound Off below

One of them is Dr. Joe Nasser, a Canadian surgeon and one of the short-term volunteers. Nasser is currently on board for three weeks, time he took off instead of going on holiday with his family.

"It's a wonderful thing to do, a great humanitarian gesture," Nasser told CNN. "There is tremendous need here, as these countries are very poor and have very few resources of any kind."

He described a recent surgery he performed on a 14-year-old boy with a benign but "extremely aggressive tumor" that had "invaded" almost the whole of the young man's face, leaving him completely disfigured.

Following successful surgery to remove the tumor, the boy was given a more "acceptable appearance," Nasser said.

The charity behind "Africa Mercy" was founded by Texas-based Don Stephens and his wife Deyon.

The couple took out a bank loan in 1978 and purchased a retired luxury ocean liner for $1 million.

Their dream was to create a modern, mobile hospital that would provide free surgery and treatment to the world's poorest people.

In 1982 she sailed to Africa with 350 crew and a new name, the "Anastasis." She was the first of five ships that have served in more than 150 ports in developing nations around the world.

Last month, the Don and Deyon Stephens were presented with the Humanitarian Award from Variety, the international children's charity for their 30-year commitment to treating the world's poor.

Don Stephens said the idea came after he stayed on a tropical island, and a storm occurred. "There was a hurricane, and I heard that one of the girls had prayed for a ship to come with everything that was needed to clear up the storm damage," Stephens told CNN.

"It was like a laser beam going off. I couldn't get the idea out of my mind and I knew it was what I wanted to do."

"We then hope the countries' health care systems can be better off after we leave for the next country," Stephens said.

Finding that next country takes a lot of research and coordination with local governments and diplomacy.

In 2010 the ship will go to Togo, then South Africa. Mercy Ships is also planning to go to the Democratic Republic of Congo.

"People know that we're here to help, regardless of race, religion and political affiliation."