(CNN) -- Nathan Wolfe is a hunter, but he doesn't carry a gun. His prey are invisible to the naked eye. 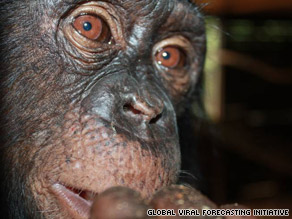 Wolfe leads expeditions into the mysterious world of viruses and pathogens.

"They are everywhere," said Wolfe, a microbiologist who speaks of his targets -- infectious organisms -- with the giddy lilt of a teenager on a first date. "We have the potential to explore a completely new biological world and go out and really find new things all the time."

One bug has been Wolfe's singular obsession for more than a decade, arguably the biggest menace to humans: malaria.

"If you think about HIV virus as a singular hurricane event, malaria is like the hurricane that's been hitting for thousands of years -- constantly," said Wolfe, who heads a research institute called the Global Viral Forecasting Initiative.

Although scientists have amassed volumes of knowledge about this nimble and changeable parasite, none of that knowledge has reaped a malaria vaccine or a sustainable ability to fight it.

But Wolfe believes that a discovery by his team may have tipped the balance in humans' favor.

Monday, research by Wolfe and his colleagues appeared in the journal Proceedings of the National Academy of Sciences, outlining what they believe to be the origins of malaria.

Malaria is one of the planet's biggest killers. But where did it begin? The answer could finally lead to a cure. Dr. Sanjay Gupta reports from Africa.
10 p.m. ET

According to Wolfe and his team, malaria jumped to humans from our closest living relatives: chimpanzees. This finding, he says, unlocks one of the biggest medical mysteries confronting humans.

"We can actually understand, we can actually re-create the story that explains a fundamental and important part of our history," Wolfe said. "For me, this is the microbiological equivalent of discovering the origins of HIV."

Understanding the origin -- and the genetic behavior -- of a pathogen is the holy grail in the world of infectious disease.

Though not a public health issue in the United States, malaria infects 500 million people every year and kills between 1 million and 3 million. Its assault on humans has been relentless, especially among African children.

Malaria hijacks and kills healthy red blood cells and infects the liver. If not treated soon after onset of symptoms -- such as fever, chills, diarrhea and shortness of breath -- those infected by malaria can have neurological problems or cognitive problems, or ultimately die.

It is a biological menace, constantly morphing, eluding the best efforts to fight it.

"The lack of an effective malaria vaccine is one of the biggest public health failures of our time," Wolfe said.

From Wolfe's perspective, the best way to reverse those failures, and to create a vaccine, is to first understand the genetics of the disease.

His understanding grew on one of several trips to the dense forests in Cameroon. He collaborated with a team of pathogen hunters, including Fabian Leendertz of the Robert Koch Institute in Germany and Stephen Rich of the Laboratory of Medical Zoology at the University of Massachusetts, Amherst. They studied chimpanzees at the Limbe Wildlife Center in the Ivory Coast.

Why look at chimpanzees?

"They are our closest ancestors," Wolfe said. "The closer two animals are, the higher the chances they will be able to share diseases and the more likely one of the viruses will jump to us."

"This fills out a big blank space," Wolfe said. "But at the same time, this finding also suggests there is a lot that we don't know. The real life world of malaria is something we know very little about.

"As a scientist, the bigger the mystery, the better," he said.

But it wasn't just about mystery. Wolfe also had a personal score to settle. He has been infected three times by malaria. One time it almost killed him.

It was an experience that strengthened his resolve to fight this disease.

Five years after his brush with death, Wolfe was back in Cameroon at Mfou National Park. Mfou is also a sanctuary for orphaned animals, including chimpanzees.

Wolfe and colleagues tested the blood of 84 chimpanzees at Mfou and 10 chimpanzees in the Ivory Coast, all in captivity and all infected with malaria.

Next, the scientists teased out the genetic structure -- the DNA -- of the chimpanzee malaria and compared it with the DNA structure of human malaria.

The chimpanzee malaria, called plasmodium reichenowi, was genetically similar to the strain killing humans globally, plasmodium falciparum. But the chimpanzee strain is older, or what infectious disease experts would call more diverse.

That genetic similarity, and the suggestion that the chimpanzee malaria DNA is older than human DNA, is solid proof for Wolfe and his team that malaria jumped from chimpanzees to humans.

"It jumped over just like SARS did, just like avian flu did, just like HIV did," Wolfe said. "What is really crucial, what is significant, is it continuing to jump over?"

If malaria is continuing to jump over, and if it is genetically more complex than previously thought, then, according to Wolfe, the eight novel malaria parasites his team found add chapters to the story about malaria and potentially widen the scope for creating an effective vaccine.

Malaria experts are impressed with the finding, but not all are convinced that this discovery will cause the vaccine research field to explode.

"This is an interesting biological observation that may or may not have human implications," said Dr. Kent Campbell, director of the malaria program at PATH, a leading global health organization unaffiliated with Wolfe. "Malaria is a very finely evolved organism that has proven to be quite resistant to classic vaccine research. To call this a major breakthrough on making an effective vaccine might be a bit optimistic at this point in time."

Another malaria expert is only slightly more optimistic.

"The idea that all of this misery in the world could have been due to a single event of the distant past is striking," said Dr. Patrick E. Duffy, the director of the malaria program at the Seattle Biomedical Research Institute. "What it reminds us is that the human species remains always at risk for introduction of new infectious agents. In terms of implications for vaccines, I don't know that it tells us that much."

"When you're developing treatment and vaccine strategies you need to know what it is in the population that you need to vaccinate against," said Wolfe. "We're just beginning to describe this iceberg. We know a lot of it's underwater. We know a lot of it is unknown. I think that is part of the excitement, scientifically, for those of us who are out there trying to discover these things."