From Mexico to China, people around the world have worn face masks to protect against swine flu, also known as the H1N1 virus. The problem? Experts could never say for sure whether such masks actually help you stay healthy. 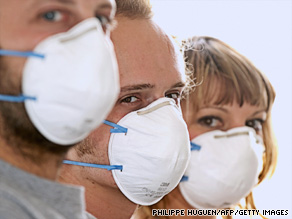 Now, the largest study to date on the subject suggests they do. When sick people and their families wear surgical face masks and wash their hands within the first 36 hours of symptoms, healthy family members are indeed less likely to get seasonal flu, researchers say. They think the results may apply to H1N1 as well.

So far, 94,512 people around the world have been infected with swine flu, and there have been 429 deaths in 122 countries.

"Many people believe that coughs and colds are so infectious that there is really no stopping them, however hard we try," says Benjamin Cowling, Ph.D., the lead author of the study published this week in Annals of Internal Medicine. "Our results suggest that is not the case, and, in fact, transmission can be effectively stopped with just some simple precautions."

Cowling, an assistant professor in the School of Public Health at the University of Hong Kong, and his colleagues looked at 407 locals who came down with regular seasonal flu (not swine flu), which was confirmed by laboratory tests. Health.com: Four things you didn't know about natural medicine

The patients were divided into three groups: One group (the control group) was told about the benefits of a healthy diet and lifestyle in terms of preventing illness; members of a second group were told to wash their hands with soap and water frequently, including when they coughed or sneezed, and to use an alcohol hand rub after touching contaminated surfaces; and a third group's member were told to wash their hands and use surgical face masks as often as possible at home (except when they were eating or sleeping).

The researchers found that when people and their families wore face masks and washed their hands within 36 hours of the first symptoms, their family members were less likely to become infected. However, those who started using masks or washing their hands after the 36-hour time period had passed saw no benefit.

In tandem with hand-washing, face masks seem to work better than hand-washing alone, but the authors could not conclusively prove which intervention was responsible for the drop in infections of family members.

Cowling says these results definitely apply to the H1N1 virus too, because swine flu is transmitted much as seasonal flu. Health.com: Young and short of breath: Could it be COPD?

Currently, the Centers for Disease Control and Prevention, which partly funded the study, does not generally recommend the use of face masks or respirators to prevent the spread of H1N1 because of their uncertain benefit. The CDC says face masks are recommended only if a person is at a very high risk of flu complications (such as someone who is pregnant), and has no other choice but to be the primary caregiver for a family member with H1N1. (The CDC says this scenario should be avoided if at all possible.)

Despite the new study, CDC spokesperson Artealia Gilliard says the current guidelines for face masks will not change. "This is another piece of great information, but this study alone shouldn't have an effect on current CDC guidelines about face masks," says Gilliard.

It's still not clear whether healthy people who wear face masks in public can prevent themselves from getting the flu. The researchers could not determine whether the masks worked because they prevented sick people from transmitting viruses or if they helped prevent healthy people from picking up the virus. Health.com: Eat smarter in your 30s, 40s, and 50s

Cowling explains that the healthy subjects had a hard time wearing the face masks and were less likely than sick people to do so. Only about half of the sick patients used the face masks routinely, and some people in the control group wore them because their use is common in Hong Kong.

"Perhaps with better compliance even more transmission could be prevented," he says.

Cowling says his research is different from past studies because it didn't rely on symptoms alone; the researchers swabbed the healthy family members at three-day intervals and confirmed infections in the laboratory. (Nearly one-third of people with influenza may not develop classic flu symptoms, such as a cough, fever, and muscle aches.) Health.com: Diabetes and sick days: Expect a rise in blood sugar

Henry Chambers, M.D., the chief of infectious diseases at San Francisco General Hospital, says the results aren't surprising. The flu virus is spread in droplets in the air, so face masks may help prevent sick people from spreading these infectious droplets, or healthy ones from inhaling them, he says. Hand-washing helps kill germs too.

According to Gilliard, the CDC recommends that people with H1N1 remain home for seven days after symptoms begin, or until they've been symptom free for at least 24 hours. People should avoid touching their eyes, nose, and ears, because infections can get started when the virus is picked up by the hands and transmitted to the face. Health.com: The healing power of tea

Cowling believes a surgical face mask is an effective way to reduce flu transmission; even the World Health Organization advises health-care workers to wear face masks when treating H1N1 patients, he says. He adds that N95 respirators, which are tight-fitting masks that filter airborne particles, are also beneficial, but they can be uncomfortable to wear for long periods of time.

A second study in Annals of Internal Medicine found that long-term treatment (more than four weeks) with the antiviral drugs zanamivir (Relenza) and oseltamivir (Tamiflu) could prevent seasonal flu with symptoms, but did not prevent symptom-free influenza infections. In terms of efficacy, there was no difference between the two drugs, according to the research team from Stanford University School of Medicine.