ATLANTA, Georgia (CNN) -- Pregnant women infected with the H1N1 virus are more likely to be hospitalized from it and perhaps even more likely to die from it, according to a federal study released Wednesday. 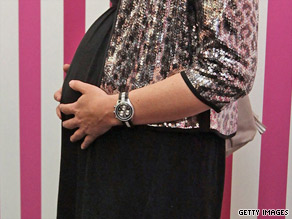 The authors of the study suggest that pregnant women infected with the virus, commonly known as swine flu, take antiviral drugs to protect themselves and their fetuses.

Some doctors are reluctant to prescribe the drugs to pregnant women because they are concerned about their possible effect on the fetus, but Jamieson urged them to put aside those concerns.

"We know, in this situation, the benefits very likely outweigh the risks, because pregnant women could get pretty darn sick with influenza," the obstetrician-gynecologist told CNN.

In fact, they could get more than sick. Of the 45 H1N1 deaths reported to the CDC between April 15 and June 16, six (13 percent) were among pregnant women.

All of them had been healthy before infection, and all went on to develop viral pneumonia, leading to acute respiratory distress that required them to be placed on ventilators, Jamieson said.

She acknowledged that the numbers are small, but said data collected since then are still reason for concern. Of the 266 H1N1 deaths investigated by the CDC to date, 15 (6 percent) were among pregnant women, she said. That's six times the percentage of U.S. women who are pregnant at any given time.

In addition, pregnant women infected with H1N1 were four times as likely as sick people in the general population to be hospitalized for it, she said. But the study cautioned that part of that increase may be because of doctors being more likely to hospitalize a pregnant woman than a nonpregnant person with similar symptoms.

Still, the apparent disproportionate impact of H1N1 on pregnant women is not surprising, given the body changes that occur during pregnancy, she said.

"As the uterus grows and pushes the diaphragm up, there is less room for the lungs," affecting a woman's ability to breathe, she said.

Pregnancy's impact goes beyond structural; it affects the body's ability to fight off illness, she said.

"A pregnant woman has to accommodate this foreign body of the growing fetus, so there is an immunological shift that occurs in pregnancy," she said.

Though it is not clear whether that immunological shift translates into a greater likelihood of contracting the virus, there is no doubt that it can result in more severe illness among pregnant women who are infected with it, she said. "They are more severely affected, and that is consistent with what we are seeing with this H1N1," she said.

Still, Jamieson said she is not recommending that pregnant women avoid crowds or take any other precautions that would affect their daily routines.

She said she hopes to continue to track what happens to the H1N1-infected pregnant women in the report, though the details have yet to be worked out.

All About Influenza • Pregnancy and Childbirth • Swine Flu