At Camp Twitch and Shout, Tourette kids can be themselves

(CNN) -- For Brad Cohen, the barking and squealing noises he could not control began in the fifth grade. 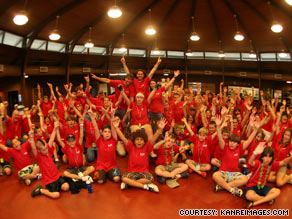 "I remember eating lunch at school all by myself and the mean kids would parade around me and mock my noises. My teacher made me get up in front of the class and apologize to everybody for the noises I was making," Cohen recalls.

More than 20 years later, Cohen is a camp director, celebrating the first year of Camp Twitch and Shout, a place for youngsters, who like Cohen, have Tourette syndrome.

"Tourette syndrome is a neurological disorder which causes people to make noises and tics that they can't control," Cohen says.

Fifty campers, between the ages of 7 and 18, came from all over the country to spend a week in Winder, Georgia, about 45 miles east of Atlanta. They have plenty to do, from swimming and fishing to music and arts and crafts. Most have been teased or harassed in school, and the camp is a place just to have fun.

"It's very nice to be able to let it all out and just not have to worry and not have people stare at you and think that you're weird and think -- what's wrong with that person?" says 16-year-old camper and black belt Tinsley Birchfield of Atlanta.

For other campers, such as Jacob McGee of Savannah, Georgia, just being outdoors is magical. "My favorite part was when we climbed the tree. That was pretty awesome. I went as high as I could go. It was really fun," says the 11-year-old.

"A child goes to camp, they see that they're not the worst. ... There are others that are functioning pretty well with worse tics than they," Schub says.

Cohen adds, "They see that wow, 'There are other kids that are like me.' They laugh, they tell the same jokes, they have the same interests. And what we hope is that their self-esteem goes up."

But campers such as teenager Kevin Kardon of Athens, Georgia, say they've just gotten used to it.

"It's just kind of like you're listening to music, and you hear something in the background and you don't really hear it," Kevin says.

According to the Centers for Disease Control and Prevention, three out of every 1,000 school-age children are believed to have Tourette syndrome. The cause is unknown, but genetics appear to play a role. Most children develop the condition between 7 and 10, and if their tics are mild to moderate, they usually require no medicine to control them. Symptoms usually peak during the late teens or early 20s.

"Many children, as they get older, the tics become either much less prominent or certainly reduced to a single or just a few tics that are not as disabling," Schub says.

That was certainly the case with Cohen. Barking is still his dominant tic, but when he was the age of his campers, he wrestled to control several others, including eye blinking, teeth chomping and arm twitching. In middle school, when his tics were at the height of their intensity, the principal approached him and asked if he'd like to educate the student body about his condition. Cohen says this move changed his life.

And that's what he's been trying to do in the classroom for more than 13 years. At 35, Cohen is an elementary school teacher, the author of a book on Tourette syndrome and now a camp director. He says he hopes his campers find strength in knowing they are not alone and will carry this new confidence home with them to face the challenges of the upcoming school year.

"When they have tough times and they think they can't find success, it's our goal that they will think back to their experience at Camp Twitch and Shout and say, 'You know what? I can do it; I can be successful because I did it at camp,' " Cohen says.

Next summer, Cohen says he plans to recruit twice as many campers and hopes the experience will be as worthwhile for them as it was this year for 15-year-old Chris Wall of Athens.

"This camp was awesome because it had people just like me," says Chris, beaming.

All About Centers for Disease Control and Prevention • Georgia