For Gen Y woman with cancer risk, 'it's just a boob'

CHICAGO, Illinois (CNN) -- It's Saturday night. Three young women are dressed to the nines at a trendy bistro on Rush Street in downtown Chicago. They're having drinks outside on the kind of summer night that makes you fall in love with the city. 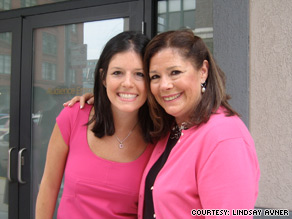 Lindsay Avner (left, with her mother) had a mastectomy after testing positive for the BRCA gene mutation.

"They call this 'Viagra triangle,'" Lindsay Avner says, to peals of laughter.

On this night, these twentysomethings aren't thinking about flirting, though. They are thinking about issues most women their age don't: life insurance and freezing their eggs.

Tonight Avner is talking to two sisters from Dallas, Texas, about their imminent genetic testing to see whether they have the BRCA gene mutations that will predispose them to developing breast and ovarian cancer.

Avner, 26, knows what they're going through. She tested positive for the gene three years ago.

Women with the BRCA gene mutations have a 60 to 80 percent chance of developing breast cancer -- at least five times higher than the general population -- according to the American Cancer Society. Additionally, these women have up to a 60 percent chance of getting ovarian cancer in their lifetime.

"I know you're scared. It's a scary thing," Avner says. She has told her story dozens, even hundreds, of times but says she never tires of it.

"I'm trying to stay positive," says one of the sisters who recently found out that her dad carries the gene passed down from his mom, who had breast cancer. "I keep telling myself that it's better to know and be ready."

Women with the inherited mutations have an increased risk of developing these cancers at a young age, before menopause, and often have multiple close family members with the disease, according to the National Cancer Institute.

"The funny thing is that nothing in your body has changed the day you hear the results," Avner says, reflecting on the experience of hearing a positive test result. "You were either born with it or you weren't. You are just going armed with more knowledge."

That genetic knowledge convinced Avner to undergo a prophylactic double mastectomy when she was 23. The surgery involves removing as much of the at-risk tissue as possible, in order to reduce the chance of developing cancer. A year later she started an organization to educate young women about breast cancer and preventive health, Bright Pink.

"It's something our parents and grandparents didn't have available," Avner said. Every female member of the family, from aunts to her grandmother, died from the disease.

Her mother is the only survivor, but endured four bouts with breast and ovarian cancer. "I wanted to know, so my future kids don't suffer like I did, seeing my mom going through chemo and struggling with it."

Most young women involved with Bright Pink have had family members with the disease. Because of their increased risk, they are remarkably conscious of their health.

Some say that they think twice before spending money on shoes or going out, so they have enough saved for their yearly tests, including mammograms, which can still be costly even with insurance. A number of the young women involved with Avner's organization don't want to tell their insurance companies they tested positive for the BRCA mutations, fearing rate increases or dropped coverage.

"It's not an old person's disease," says Dr. Deborah Lindner, Avner's personal physician. Lindner also speaks from personal experience. The obstetrician-gynecologist, who now serves on Bright Pink's board, found out she had the genetic mutation when she was 32 and went through the same prophylactic surgery.

"If a young woman finds out early on that she's at high risk, it's nothing to freak out about, but it can be something to plan for."

Like some other high-risk young women, the sisters from Dallas bought life insurance policies in advance of their genetic tests. They feared being discriminated against if they tested positive for the BRCA mutations.

They prepare for the worst and hope for the best. If they test positive, they said they would consider the preventive surgery in their later 20s.

Breast cancer rates in young woman are low: about 5 percent of breast cancers occur in women younger than 40. But, when it does happen, the cancer is more likely to spread faster, be of a higher grade (the cells look and behave more abnormally) and be less receptive to chemotherapy and other treatments.

Psychologically, it can be especially shocking and difficult for young women who have to deal with a "grown-up" medical issue at a time of life usually reserved for family and career.

"If I don't find Mr. Right by 35, I am freezing my eggs," Avner says, noting her increased risk of ovarian cancer. A preventive mastectomy doesn't guarantee that she won't develop ovarian cancer. In fact, it doesn't even eliminate the risk of breast cancer.

And what about the prospects of dating and finding Mr. Right?

"It's just as hard as it is for any woman in her 20s. But, I am in a good place right now. I know myself and I'm comfortable with who that is," Avner tells the group in a calm, confident tone.

"Some guys Google me before we go out. They're immature and tell their friends how [my breasts] look and feel, but those guys aren't for me," Avner says taking a sip of her drink and looking out into the bustling line of cabs arriving at the surrounding bars.

"I mean, after all, what difference does it make? It's just a boob."