Fewer calories equals a longer life -- At least in monkeys

Cutting daily calorie intake by 30 percent may put the brakes on the aging process, have beneficial effects on the brain, and result in a longer life span, according to a new 20-year study of monkeys published in the journal Science. 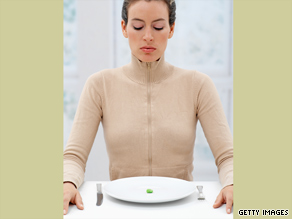 Calorie restriction needs to be done carefully in order not to turn into malnutrition, say experts.

The study confirms in primates what's long been known in other species, including mice, worms, and flies. And it's no surprise to the humans who have taken the animal research to heart and adopted calorie restriction as a means to a (hopefully) longer and healthier life.

Brian M. Delaney has been eating 20 percent fewer calories than most people of his size and stature since 1992. "The new study confirms everything we have seen," says Delaney, coauthor of "The Longevity Diet" and president of the nonprofit Calorie Restriction Society, which had 2,000 members in 2007 and thousands more on mailing lists. "It also adds some new information on brain volume changes."

In the study of 76 adult rhesus monkeys (a species that shares many similarities with humans), only 13 percent of the calorie-restricted animals died during the 20-year period, compared with 37 percent of monkeys allowed to eat their usual diet. (The study began with 30 monkeys; an additional 46 were added in 1994.) Health.com: I survived the Master Cleanse -- Then gained all the weight back

At the start of the study, the researchers analyzed how much the monkeys were eating and then cut the calories by 10 percent each month for three months in the calorie-restricted group. The other monkeys were allowed to eat as much as they wanted.

The calorie-restricted monkeys preserved volume in areas of their brain that have been linked to motor control, memory, and problem-solving.

"The new study shows the effects of calorie restriction in primates that are closely related to humans," says lead researcher Ricki Colman, Ph.D., an associate scientist at the Wisconsin National Primate Research Center, in Madison. "Monkeys in the calorie-restricted group are more likely to live healthier, longer." The oldest monkey in the study is now 29. This species has an average lifespan of 27 when in captivity.

"We don't know about ultimate longevity yet, but the monkeys in the calorie-restricted group are unencumbered by age-related diseases and brain atrophy, which is linked to cognitive ability," says Colman. Health.com: I had a heart attack at 43

Monkeys in both groups consumed very healthful diets. "We are studying calorie restriction, not malnutrition," stresses Colman, who does not follow this type of diet herself. The study diet included 15 percent protein and 10 percent fat and was enriched with vitamins.

As an advocate of calorie-restricted diets, Delaney says he isn't starving, despite his low-calorie lifestyle.

He eats a hearty breakfast including a large bowl of low-fat granola and fruit, soy milk, nonfat yogurt, and a cup of coffee. Delaney admits his 900-or-so-calorie breakfast is more than most people consume in the morning, but he then skips lunch, works an eight- or nine-hour day, and eats a high-fiber, vegetarian dinner, keeping his total intake under 2,000 calories a day. (An average adult male consumes 2,618 calories a day, according to statistics from the Centers for Disease Control and Prevention.)

As a result, Delaney may live a longer and healthier life than his peers who consume more calories. Studies in mice, worms, and flies have shown that this type of diet -- which is not a form of malnutrition or an exercise in self-starvation -- results in longer lives and a lower risk of some cancers, heart disease, and other illnesses associated with aging. Health.com: Why belly fat is bad for your lungs, and why exercise is good

Exactly how a calorie-restricted diet helps stave off age-related diseases and extend lifespan is unknown, but controlling calories can help people lose weight or maintain a healthy weight. Obesity is a major risk factor for many diseases. Eating healthy, nutrient-dense foods can also produce important physiologic changes in the body, which may lower disease risk.

However, not everyone agrees that such severe calorie restriction is a good idea. Keri Gans, R.D., a nutritionist in private practice in New York City and a spokesperson for the American Dietetic Association, has some concerns about both the short- and long-term effects of calorie restriction.

"If you go too far, it can lead to a lot of problems such as dizziness and fatigue in the short term," she says. "In the long term, there can be nutritional deficiencies, decreases in bone mineral density that can lead to osteoporosis, and menstrual irregularities that can lead to infertility.

"Once you start to restrict calories, there is no guarantee of adequate nutrition unless you are following a plan monitored by a registered dietitian," she says. "The less calories you consume, the harder it may be to ensure that your diet includes foods that provide proper nutrition." Health.com: 5 secrets to get-slim success

Even though Delaney is a believer, he agrees that calorie restriction is not for everyone. "If you are pregnant or really old, it is not clear that you can get much benefit, and it may be risky," he says.

He is also quick to point out that a calorie-restricted diet for humans means different things to different people.

"It isn't any one number; it's a principle," he says. "Cutting daily calories by 5 percent is a mild version of calorie restriction, and according to research in lab animals and some in humans, you will get some of the benefits," he says. Others may restrict calories by 20 percent, he says. Health.com: 8 tips for controlling portion sizes

"There really isn't any magic number," Delaney says. His advice? Forget about total calories, measure what you are eating, and go to your doctor to check your fasting glucose, cholesterol, and blood pressure. "Reduce your calories by a little bit for a few months, then go back to the doctor and see if your numbers have improved," he suggests.

If your numbers have improved, it may mean you are aging at a reduced rate, he says. High cholesterol, blood pressure, and diabetes are all linked to heart disease and premature death.

Malena Perdomo, R.D., an American Dietetic Association spokesperson and a clinical outpatient dietitian at Kaiser Permanente Colorado, in Denver, says the new study is interesting. "We have seen similar results in mice and we know that by controlling body weight, we have better health outcomes," she says.

Controlling portion sizes and reducing calories is the key to weight loss, but restricting calories should be done carefully, she advises. "The first step is to get rid of high fat, high sugar foods in the diet, and then we move on to the quality of diet and make sure there are adequate fruits, vegetables, whole grains, lean protein, and low-fat dairy in the diet."

Delaney agrees -- these healthful foods are the building blocks of a calorie-restricted diet.