(CNN) -- A government advisory panel voted Tuesday to recommend eliminating prescription drugs that combine acetaminophen with narcotics -- such as Vicodin and Percocet -- because of their risk for overdose and for severe liver injury. 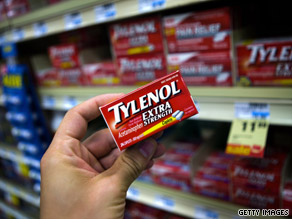 Acetaminophen, found in drugs such as Tylenol, is one of the most commonly used drugs in the United States.

The panel, assembled by the Food and Drug Administration, voted 20 to 17 to advise the FDA to remove such prescription combination drugs from the market.

The group recommended that the FDA "send a clear message that there's a high likelihood of overdose from prescription narcotics and acetaminophen products," Dr. Sandra L. Kweder of the FDA's Office of New Drugs said at a news conference after Tuesday's meeting.

The panel was meeting for the second day to vote on recommendations to reduce the risk of serious liver injury associated with acetaminophen, which is found not only in prescription drugs, but also in over-the-counter medications such as Tylenol and NyQuil.

It also advised the FDA to lower the maximum daily dose of acetaminophen in over-the-counter and prescription medications, and to address the formulations and dosing recommendations for children.

Kweder said the FDA is already "well on the road" to addressing the pediatric concerns.

The FDA is not required to follow the recommendations of its advisory committees, although the agency typically does.

If the agency does not choose to eliminate prescription combination drugs, the panel said the FDA should lower the amount of acetaminophen in the drugs and also take some action to ensure that subscribers and patients are aware of potential liver damage posed by taking these products, Kweder said.

In another vote, the panel had voted to advise the FDA to put a boxed warning on the prescription combination drugs.

Although acetaminophen is one of the most commonly used drugs in the United States for treating pain and fever, overdoses of acetaminophen have been linked to 56,000 emergency room visits, 26,000 hospitalizations and 458 deaths during the 1990s, according to the FDA, citing one study.

The agency cited another study, a 2007 Centers for Disease Control and Prevention population-based report, that estimated acetaminophen was the likely cause of most of the estimated 1,600 acute liver failures each year.

The advisory panel could have voted to recommend pulling over-the-counter drugs that use acetaminophen in combination with other ingredients -- such as NyQuil, Pamprin and Allerest -- but it chose not to.

Some panelists cited data that suggests that combination over-the-counter drugs account for less than 10 percent of acetaminophen overdoses.

Kweder said families should carefully read medicine labels to know what is in the medicine and how much should be taken.

Abbott Laboratories, which makes the brand-name Vicodin, which has also been available as a generic since the mid-1980s, said in a statement that "today's discussion is an important continuation of the dialog around balancing patient safety with the need for treatment options for patients in pain."

It said, "Pain affects 75 million Americans, more than diabetes, cancer and heart disease combined" and added that it would follow the FDA's final determination.

Endo Pharmaceuticals, which makes the brand-name Percocet, did not immediately return a phone call seeking comment. Percocet is also available as a generic.

CNN's Saundra Young and Taylor Gandossy contributed to this report.

All About Food and Drug Administration • Tylenol • Vicks NyQuil