(CNN) -- A Colorado company's recall last week of beef products possibly contaminated with E. coli has been expanded, the U.S. Department of Agriculture said this week. 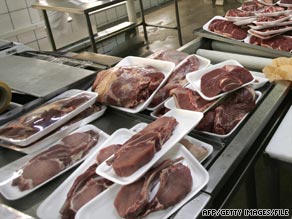 The recall came as a result of "an ongoing investigation into 24 illnesses in multiple states," the USDA said.

The initial recall of 41,280 pounds announced last Wednesday was voluntarily expanded Sunday to include an additional 380,000 pounds of products made by the JBS Swift Beef Company, of Greeley, Colorado, the USDA said.

The recall came as a result of "an ongoing investigation into 24 illnesses in multiple states, of which at least 18 appear to be associated," the USDA's Food Safety and Inspection Service said in a written statement.

USDA spokesman Brian Mabry said no fatalities had been reported.

On its Web site, the company said the suspect beef was produced at its Greeley plant on April 21 and distributed nationally and internationally.

"Each of our customers will be personally informed of this recall by phone," the wholesaler said. A spokesman would not identify those customers to CNN.

She expressed concern that nearly seven months into the Obama administration, a key undersecretary position at the USDA has not been filled, which may be slowing the government's ability to respond to such health threats.

"That person in that position would have significant public health experience and understand how these processes work, how meat enters the chain of commerce," Klein said.

The recall underscores the need for "a comprehensive animal identification system" that would allow meat suppliers to trace their products to an individual ranch, she said.

Klein urged supermarkets that use customer loyalty cards to track shoppers' purchases to determine those who have bought the recalled meat.

Boxes of the recalled product bear the establishment number "EST. 969" inside the USDA mark of inspection, the identifying package date of "042109" and a time stamp ranging from "0618" to "1130," the statement said. It added that some of the beef products might have undergone further processing and might not have the "EST. 969" marking on products for sale directly to consumers.

The USDA urged any customers with concerns to contact the store where they bought the meat.

JBS spokesman Chandler Keys said his company's products may have had nothing to do with the outbreak.

"It is important for consumers to note that the recalled product from the date in question was sold by JBS as whole muscle cuts, not as ground beef," Keys said on the company's Web site. "The ground beef that might have been associated with illness was produced by other companies who often do not use the antimicrobial intervention steps we employ in our facility to reduce the risk of the beef products."

He said JBS agreed to expand its recall "out of an abundance of caution for consumers."

Symptoms of infection with E. coli bacteria can include severe or bloody diarrhea, vomiting and severe abdominal cramping.

The USDA urged consumers to cook all ground beef or ground beef patties to an internal temperature of 160 degrees Fahrenheit to kill any bacteria.

All About E. Coli • U.S. Department of Agriculture • Food Safety