Middle-aged and older women who have migraines with auras -- the flashing lights, a certain smell, or other sights or sounds that can signal oncoming pain -- appear to have a higher risk of strokes and heart attacks than their migraine-free peers, a new study suggests. 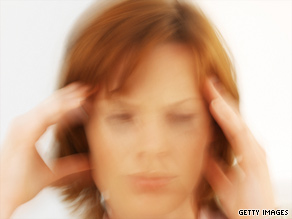 Some migraines come with auras, which may include flashing lights or sounds that can signal oncoming pain.

What's more, a second study found that such women are more likely than others their age to have brain infarcts, which are tiny areas of tissue death common in the aging brain. (They don't necessarily pose any health hazard.)

However, experts caution that the number of women in the study who had strokes or heart attacks was relatively small, and the risk was seen in women who had either the most frequent or least frequent migraines. (For example, once-a-month migraines with auras were not associated with elevated risk.)

"Overall, this is not a study that should scare women with migraines with auras," says the study's lead author, Dr. Tobias Kurth, Sc.D., of the Brigham and Women's Hospital and Harvard Medical School, both in Boston, Massachusetts, and INSERM, the French national research institute.

It was already known that migraines with auras are associated with a higher risk of stroke in women under 55, although strokes in young women are so rare that the risk is still very small. However, it wasn't clear if there was a link in older women or if frequent headaches were more dangerous.

Kurth says his new research does suggest that frequency plays a role in the risk of migraine-associated stroke and heart attack.

In the first study, published in the journal Neurology, Dr. Kurth and his colleagues looked at 27,798 female health professionals ages 45 and older, including 3,568 who had migraines, from the Women's Health Study.

They found that women with once-a-week-migraines with auras -- who made up 5 percent of the women with migraines -- were four times as likely to have had a stroke during the 12-year study as women without migraines.

And women who had migraines with auras less than once a month (75 percent of the group) were more than twice as likely as migraine-free women to have a heart attack, and almost twice as likely to have had a heart procedure, such as bypass surgery. Overall, only 2.5 percent of women in the study had experienced a stroke, heart attack, or related problem. Health.com: Heart surgery that may cure headaches

In the second study, published in the Journal of the American Medical Association, Ann I. Scher, Ph.D., of Uniformed Services University, in Bethesda, Maryland., and her colleagues interviewed 4,689 Icelandic men and women (with an average age of 51) about their migraine symptoms. Health.com: Quiz on surprising migraine causes and cures

Brain scans conducted more than 26 years later suggested that those who had migraines with auras at least monthly in midlife were more likely to have brain infarcts. Overall, 23 percent of women with such migraines had the infarcts, compared with 15 percent of women without them. The infarcts were found in the cerebellum, in the lower back of the brain. About 20 percent of men had infarcts in the same brain region, regardless of whether they had migraines.

What does it mean? The experts aren't sure yet, but people with migraines don't seem to be at greater risk of memory loss or mental decline as they age. It also seems that the infarcts are separate from the stroke risk, according to Kurth, who also wrote an editorial accompanying the second study. It would be "premature to conclude that migraine has hazardous effects on the brain," he writes. Health.com: The everyday struggles of living with fibromyalgia

"The lesions are clinically silent; it is absolutely unclear if they are harmful," says Kurth. "Based on current knowledge, they are not."

What is clear is that some women who have migraines with auras are at higher risk than others. For example, high blood pressure, smoking, and the use of hormonal birth control or post-menopausal hormone therapy can increase the stroke risk.

Frederick Freitag, D.O., of the Diamond Headache Clinic and the National Headache Foundation, both in Chicago, Illinois, says that a woman with migraines with auras can reduce her risk by exercising, eating healthy, and quitting smoking. Health.com: Best new pain cures for women

"[The stroke study] is a red flag for us as physicians, to bear in mind as we see our patients, but I don't think it should be taken as an alarm cry to the population as a whole," he says.

It's still not clear why auras are more problematic and potentially more dangerous than aura-free migraines. Since auras are a neurological phenomenon, it's not known why they might affect the heart or increase the risk of heart attacks. Health.com: Surprising things that give you headaches

"It's an area of speculation," Dr. Kurth says. "We don't really know what makes the auras so special."

About 12 percent of people get migraine headaches, which are characterized by intense pain and other symptoms such as numbness, tingling, and auras. Migraines are three to four times as common in women as in men.

All About Heart Attacks • Stroke