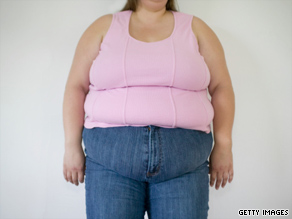 Women who had bariatric surgery lowered their risk of cancer compared with obese women without the surgery.

Exactly why this occurs and whether it's also true for obese men is not yet clear. Obesity is a known risk factor for colon, breast, endometrial, kidney and esophageal cancers. However, the researchers found that the surgery-related weight loss and drop in caloric intake did not seem to be solely responsible for the decline in the women's cancer risk, according to the report in the July issue of Lancet Oncology.

In the study, researchers followed two groups for an average of 10.9 years -- 2,010 men and women who had weight-loss surgery and 2,037 obese people who did not undergo surgery. Those who had the surgery lost roughly 44 pounds, compared to just 3 pounds in those who did not. During the 10-year period, 117 people who had surgery developed cancer, as did 169 of their counterparts who tried to lose weight nonsurgically. Health.com: 20 little ways to drop pounds and keep them off

However, there were more women than men in the study. A larger study might detect an effect in men, too, the researchers note. Still, this is not the first study to suggest that weight-loss surgery does not reduce cancer risk in men, and it's possible that hormonal differences between the sexes may play a role.

For example, higher levels of the female sex hormone estrogen can stimulate the growth of breast and endometrial cancers, and fat cells are known to produce estrogen.

"Women are more sensitive to estrogen, so you might expect to see a major difference in estrogen-related cancers after surgical weight loss," said Dr. Neil Hutcher, the director of bariatric surgery at St. Mary's Bon Secours Hospital, in Richmond, Virginia.

It's also possible that obesity-related cancers that are more common in men -- such as colon, rectal, and kidney cancers -- may simply take longer to manifest than weight-related cancers in women, according to an editorial by Dr. Andrew G. Renehan of the University of Manchester, in the United Kingdom. Therefore, a longer study may show an advantage for men.

"I think the message here is that obesity increases the risk of cancer, [so] more aggressive screening for those cancers in obese people is indicated, especially breast, uterine, and colon cancers," said Dr. Gregg H. Jossart, of Laparoscopic Associates of San Francisco, who was not involved in the study. "Finally, sustained weight loss through obesity surgery probably does decrease the risk of death from colon cancer-- men are most at risk for this-- but the study population is simply not large enough to determine this." Health.com: Easy weight-loss recipes

The weight-loss surgery techniques used in the study may also partly explain the findings. The majority of participants had vertical banded gastroplasty (commonly known as stomach stapling), in which the upper stomach is stapled to create a smaller pouch; some had adjustable gastric banding, in which a silicone band is placed around the top of the upper part of the stomach to restrict food intake. Health.com: Raising the salad bar: How to keep greens diet-friendly and delicious

Fewer than 300 people in the study had gastric bypass surgery, a more dramatic technique in which the surgeon creates a golf-ball-shaped pouch to curb food intake. Although a reduction in cancer risk was seen with all three techniques, some experts believe that gastric bypass surgery may one day be shown to be more effective than the other two.

In gastric bypass surgery, a portion of the stomach is stapled to create the pouch and the intestines are rerouted to the new, smaller stomach. Surgeons rearrange the anatomy and that may change the hormonal milieu and affect cancer risk, Hutcher explained.

"There is no question that obesity increases the risk for certain cancers, and that losing weight can help reduce these risks," said Dr. Shawn Garber, the chief of bariatric surgery at Mercy Medical Center, in Rockville Center, New York, and the head of the New York Bariatric Group, in New Hyde Park, New York. "Stomach stapling has fallen out of favor because it is not as effective as other bariatric procedures."

Dr. Nicolas Christou, the director of bariatric surgery and a professor of surgery at McGill University, in Montreal, agreed. He said that gastric bypass is a more effective surgery and, as a result, may have greater effects on cancer risk in women and men.

Christou conducted a study that showed men and women who had bariatric surgery were 78 percent less likely to develop any cancer, when compared with their equally overweight counterparts who did not undergo weight-loss surgery. He presented these findings at the 25th annual meeting of the American Society for Metabolic and Bariatric Surgery, in Washington, D.C. Health.com: America's top 10 healthiest diets

However, any type of weight-loss surgery can have serious side effects or cause complications. In the study, 13 percent of people had complications of surgery, such as a bleeding, blood clots, infections, or other problems.

All About Obesity • Cancer