ALEXANDRIA, Egypt (CNN) -- "Quick, I-V." "Is he breathing?" "Flip him over." "Heart rate? Pulse?" The nurses' commands and questions filled the recovery room at an Egyptian hospital. 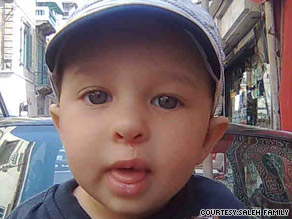 Adnan Saleh's "after" photo. The tot from Egypt received surgery from Operation Smile to fix a cleft lip.

Seven-month-old Adnan Saleh had just come out of surgery to fix a cleft lip. But suddenly his newly repaired mouth was filling with blood. The post-op nurses rushed to make sure he didn't choke.

"Mother! We need a mama," one of the male nurses shouted in his South African accent, once Adnan was stabilized. "Speak to him!"

Adnan's mother did what we've all seen our own mothers do: pretend that she wasn't crying. "Habibi, habibi," Ghada Saleh tried to say in as singsong-y a voice as she could muster, so Adnan would recognize her. "My love, my love," in Arabic.

At the same time, she attempted to discern her only son behind the stitches on his nose and lip, and wires everywhere else. "Adnan, Adnan! It's me, Mommy," she bravely and desperately called out in Arabic.

Just a moment earlier, I had come out of the operating room, running with the doctors and anesthesiologist to the recovery room, to tell his worried parents that everything had gone well and Adnan looked great.

But now, this complication. His father's usually jovial demeanor was stiff. Once the commotion started, he left the room.

I couldn't help but tear up. I would be lying if I said I hadn't gotten attached to Adnan and his family. I had been following their entire journey of "kissing his cleft lip goodbye" with the Operation Smile volunteers at their mission site in Alexandria, Egypt.

I tried imagining what Adnan would have looked like without the surgery. Even with the cleft lip, he was "Gerber baby" cute -- but what about when he grew up? In countries like Egypt, people with cleft lips and/or palates are looked upon as "cursed" and virtually shunned from society. "I just want my son to have a chance," Adnan's father told me the first day we met. Mohammed Saleh and his pregnant wife waited for hours for their turn with the Operation Smile doctors.

The global rate for cleft lip and/or palate is about 1 in 750 births. In the United States, we don't think about the condition much because the surgery to repair it is routinely performed soon after a baby is born. But in Third World countries, the corrective surgery is expensive and hard to come by -- especially for families like the Salehs.

Experience the sights and sounds of Adnan's journey »

"Papa! We need the father," the nurse called out again, after Adnan had awakened. I pushed open stainless steel doors and motioned with my head. Saleh came back in, calmer and smelling of cigarettes.

It was the "after" moment. Adnan's eyes were closed, his face was puffy from the medication, but his nose and mouth were aligned, like the real "Gerber baby." His parents quietly studied their son.

After spending a week with this family, I thought I could read some of the wonder and fear in their eyes. Wonder at the possibility of what their son could now become, be it doctor, lawyer or policeman. Fear at the prospect of going through this journey again with the baby on the way.

The doctors I spoke with don't know exactly what causes the deformity. They point to genetic, environmental and nutritional factors. For example, they say in Third World countries, the lack of folic acid and the practice of intermarriage increase the likelihood of cleft lip and/or palate.

Operation Smile focuses on the areas with the greatest need, from Bolivia to Bangladesh. The organization received a burst of publicity during the last presidential race: Republican nominee John McCain's wife, Cindy, has volunteered at the organization since 2001 (the couple's youngest daughter, adopted from an orphanage in Dhaka, Bangladesh, was born with a cleft palate).

The doctors and nurses who volunteer their time and skill come from all over the world, pay their own way, are housed in places like military barracks (as we were), and work long days through the screening, surgery and recovery process. Despite the long hours, hard work and rustic conditions, all the professionals I encountered woke up and went to bed with a smile, knowing they were giving these youngsters a chance to do the same.

I left the hospital to go to the airport while the Salehs were still sleeping, together, on one hospital bed, in a room with five other families just like theirs. Since then, I've received e-mail updates from Mohammed Saleh.

"Now he has the chance to do anything he wants, anything that makes him happy. The father is happy when the son is happy," Saleh wrote, ending with a smiley-face emoticon.

All About Egypt • Operation Smile Inc.