Doctor rescued from Antarctica in 1999 dies at 57

(CNN) -- Nearly a decade after she was rescued from a remote Antarctic research station after diagnosing herself with breast cancer, Dr. Jerri Nielsen died early Tuesday, her brother said. She was 57. 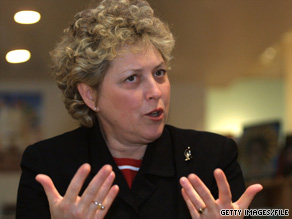 Jerri Nielsen treated herself for breast cancer while stationed at the South Pole in 1999.

Nielsen had been fighting the latest round of cancer for the past five years, brother Eric Cahill said. She died just before 4 a.m. in Massachusetts, surrounded by her family, he said.

"She would want to be remembered for the adventure and, you know, living every day, and not just the sickness," said sister-in-law Diana Cahill. "She was very much active and still even doing talks as late as March of this year. Then the last month or so, she was pretty sick."

Nielsen caught the nation's attention in 1999, when she found a lump in her breast as a 47-year-old physician stationed at the Amundsen-Scott South Pole Research Station.

After finding the lump in June, she diagnosed herself with breast cancer and began treating herself using chemotherapy agents that the U.S. Air Force parachuted to the station the next month.

It was later revealed, according to a March 2009 article in the Detroit Free Press newspaper, that Nielsen -- an emergency room doctor from Cleveland, Ohio -- performed a biopsy on herself with the help of non-medical crew, who practiced using needles on a raw chicken.

While treating herself, Nielsen carried on her duties as the sole doctor for the 41-person research group. She consulted with her doctors in the United States by e-mail and teleconference. They recommended that she return as soon as possible for treatment.

Although flights in support of the South Pole program don't usually begin until late October or early November, the start of Antarctic spring, it was October 6 when two planes set out on what was dubbed Operation Deep Freeze.

Ten days and a handful of stops later -- California, Hawaii, Pago Pago, New Zealand and then Antarctica -- rescuers braved temperatures of nearly minus 60 degrees Fahrenheit to land a ski-equipped plane at the pole, drop off a replacement doctor and pick up Nielsen. It was the earliest such flight attempted.

Once she returned home and was treated, Nielsen's cancer went into remission, and she wrote about her experience in a best-selling book, "Icebound." She married and became a public speaker, Diana Cahill said.

But in 2005, Nielsen's cancer returned in her bones and liver, later spreading to her brain.

"My experience at the pole had to do with accepting things that most people fear most deeply and coming to feel that they need not be feared," Nielsen told Psychology Today magazine in 2006. "It certainly had far more to do with peace and surrender than it did with courage. Being 'on the ice' was a great good fortune: It created a much greater clarity for me about what was essential in life.

She said that after learning her cancer had returned, "after about three weeks of going through a kind of terror, I felt the most incredible peace come over me. Now I am very happy and excited about going forward with my life. The metastatic disease is now just another part of me, another thing that has happened to me."

"She was always upbeat," Diana Cahill said. "She never really dwelled upon her illness. She told people to live every day, and it was about what kind of life you lived. She was really inspirational to a lot of people around the world."

In October 2008, Nielsen spoke at the University of Toledo College of Medicine, formerly her alma mater the Medical College of Ohio, according to the Free Press. She took off her wig to show students her bald head, the newspaper said, and told them not to be discouraged: "There is no end of life until your last breath. We can all do something to help someone."

She told the Free Press in March that the cancer had spread to her brain but still displayed her inspiring grit.

"I'm not as smart a girl as I used to be," she told the newspaper. "I'm not as hard a worker, that's for sure. But I'm still doing everything, I'm writing a book and giving speeches, and I'm really having a beautiful winter."

Nielsen told Psychology Today, "The things that make you strong, and make you feel as though you've accomplished something, are not the easy ones; it's the things you had to work and struggle through. Those are what give us our depth -- that make us not gray and plain and nothing but give us depth and texture and longing.

"I believe you're always much better off knowing what the real truth is. I think it's only then that you can come to grips with your illness, or with any difficult situation. Some people call this process 'mourning.' I prefer to call it tiring of the fear and the depression and the denial, and the fake optimism and the irritation of it all -- and just saying, 'Hey, I'm tired of feeling bad about this. Now I go on.' "

All About Antarctica • U.S. Air Force