How to deal with your child's asthma

When she was 2 years old, Sonali Mavinkurve caught a cold. But this time there was nothing common about it. 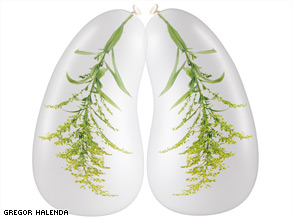 Diagnosing asthma is often tricky because many children have wheezing episodes before age 3.

"She started wheezing and had a barking cough that wouldn't quit," says her mom, Iliana Mavinkurve, who lives in Livingston, New Jersey. "I had asthma as a child, so I recognized Sonali's symptoms and was worried."

At first, doctors called Sonali's condition "reactive airway disease," because children her age can't do the breathing tests necessary to pinpoint asthma definitively. "But when her symptoms kept coming back, given my family history, Sonali got the diagnosis," says Mavinkurve.

It's never easy to hear that your child may have a lifelong illness, especially one that interferes with breathing. But the fact that asthma is so common -- nearly 7 million kids have been diagnosed, and all those with allergies or parents with the condition are at risk of developing it -- means doctors (and moms) know a lot about how to manage it. In fact, with proper treatment, even kids with severe asthma can live perfectly normal lives. So go ahead, breathe that sigh of relief. We're here to help you every step of the way. Parenting.com: A complete, interactive guide to asthma

Why spotting asthma can be tricky

Given how dramatic asthma symptoms are, you'd think it'd be a snap to diagnose. That's often not the case, especially in kids under 5. "As many as half of children have at least one episode of wheezing before age three, but after that most never wheeze again," says Dr. Paul Williams, clinical professor of pediatrics at the University of Washington.

In fact, only 15 to 20 percent of kids who wheeze go on to have lifelong asthma. Plus, very young children can't adequately perform spirometry, which requires patients to blow as hard and as long as they can into a meter; it's usually not till they're 5 or 6 that kids can do the test, which can accurately diagnose asthma, says Williams. In the meantime, you can get a pretty good sense of your child's risk by using the Asthma Predictive Index, which we've adapted into the "Risk Checker" at right. So grab a pen and see how your sweetie's symptoms stack up.

1. Has your child had frequent wheezing before age 3 (four or more episodes in one year that lasted longer than a day and disrupted sleep)?

2. Does she have at least one of these major risk factors?

3. Does she have at least two of these minor risk factors?

• she has allergic rhinitis
• she wheezes even when she doesn't have a cold
• she has a food allergy, especially to eggs, milk, or peanuts

If you answered yes to the first question along with at least one other, there's about a 76 percent chance your child's symptoms will persist through grade school. Meanwhile, 95 percent of kids who have only one yes (or none) will likely not develop asthma after age 6. Great news!

Anatomy of an attack

1. An irritant, allergen, or virus makes its way to the lungs from the upper respiratory tract.

2. The immune system kicks into gear, producing antibodies and other substances to fight it off.

4. As the room for air decreases, kids begin breathing very deeply to get oxygen. But then they struggle to release it. So as a sufferer forces air back out through the swollen tubes, a whistling -- or wheezing sound -- occurs. Depending on the severity, kids may also experience shortness of breath, rapid breathing, or chest tightness. In babies, you may also see the muscles under or between their ribs pulling in. Any of these signs means it's time to get help ASAP. Parenting.com: Common asthma triggers and how to beat them

The goal is control

Despite the fact that asthma has the potential to be so well managed that it becomes practically a nonissue, it's still grossly undertreated, says Dr. Bradley Chipps, pediatric pulmonologist and allergist at Capital Allergy and Respiratory Disease Center in Sacramento, California.

"Number one, physicians often view asthma as an episodic disease," says Chipps. "They just do crisis intervention and aren't seeing patients back on a regular basis."

In fact, only 20 percent of moms said their doctors discussed asthma control with them regularly, according to a recent survey by the Asthma and Allergy Foundation of America (AAFA). But pediatricians aren't the only ones to blame: "Adherence to therapy is miserable," says Chipps. "The average refill rate of controller medications is two to four refills per year. If you're taking them every day, the refill rate should be twelve." Parenting.com: Interactive symptom checker

The secrets to getting asthma under control: First, ask your doctor for a written asthma action plan. Consider it your customized road map to your child's medication as well as to all the lifestyle strategies that will help you help him avoid his triggers. The second step is to find the best mix of medicines for your child -- and then use them as directed.Parenting.com: Are we overmedicating our kids?

Most kids with asthma will need medication. Some may require it every day, while others need it only during cold or allergy season. The meds may come in liquid form to use in a nebulizer, a machine that turns them into a mist, or in a traditional inhaler. Either way, our cheat sheet tells you what to expect if your child has...

• Any type of asthma

What she'll need: A bronchodilator like albuterol or Xopenex (often called a rescue drug)

Why: These drugs can instantly open the airways during an attack. Unless your child has exercise-induced asthma, it's not intended for daily use. If your kid relies on it more than twice a week, it's a clear sign her symptoms aren't controlled. Parenting.com: 6 health problems your child may inherit

What to watch for: Tremor, palpitations, sense of nervousness, or hyperactivity

What she'll need: A low-dose corticosteroid, such as Flovent, Pulmicort, or Alvesco

Why: Inhaled corticosteroids reduce airway inflammation long-term. About two thirds of children in this category will have good control using one every day. Same goes for kids who flare only during certain times of the year; the drug protects them through their danger zone and then they can stop.

What to watch for: Short-term, some kids may have upset stomach, oral thrush, and body aches. Long-term, daily use of inhaled corticosteroids may slightly slow their annual growth rate, a side effect that's thought to be reversible when children stop taking the drug. Parenting.com: 9 symptoms you shouldn't ignore

What she'll need: An anti-leukotriene such as Singulair or Accolate and/or a long-acting beta agonist (LABA)

Why: If corticosteroids alone aren't working, an anti-leukotriene can block the chemicals that are further fueling airway swelling and spasms. Those who are still suffering may need to add an LABA, such as Serevent or Foradil, which are longer-lasting bronchodilators.

What to watch for: Upset stomach, cough, dizziness, drowsiness, ear pain or infection, swelling of the mouth or throat. The FDA is also investigating a possible association between the use of anti-leukotriene medications and behavior/mood changes.

Laura Flynn McCarthy is a mom of two boys. She lives in New Hampshire.