WASHINGTON (CNN) -- A nonprofit consumer group said Thursday that it will sue Bayer HealthCare, alleging "deceptive and irresponsible" advertising that contends selenium in two of its multivitamins may reduce men's risk of prostate cancer. 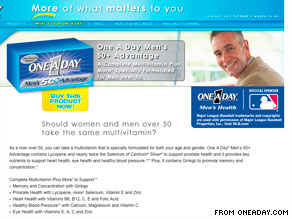 The Center for Science in the Public Interest said it informed the multinational company of its intent Thursday. David Schardt, the center's senior nutritionist, told reporters during a teleconference that the center already has filed a complaint with the Federal Trade Commission.

"We are standing behind all the claims we make in support of the products," Trish McKernan, Bayer's global spokeswoman, told CNN.

"The selenium claims are made by a [Food and Drug Administration]-approved qualified health claim. We regularly review the evidence, and we change our claims if necessitated. The emerging science hasn't compelled us to change our claims, and the FDA claim is intact."

Bayer promotes One A Day Men's 50+ Advantage and One A Day Men's Health Formula multivitamins on package labels, TV and radio ads and on its Web site. In its promotions, the company says "emerging research" suggests that selenium might reduce the risk of prostate cancer, the center said.

"Did you know that there are more new cases of prostate cancer each year than any other cancer?" according to one radio ad. "Now there is something you can do."

Both dietary supplements contain 105 micrograms of the trace mineral selenium per daily dose, or about twice the Recommended Daily Allowance, which is 55 micrograms a day for adults, according to the center. Visit CNNhealth.com, your connection for better living

"It's astounding that a company such as Bayer ... would make such deceptive claims," the center's litigation director, Steve Gardner, told reporters during the same teleconference.

Supporting the center in its letter of complaint to the FTC are nine researchers, who wrote a separate letter to Mary Engle, associate director of advertising practices. Among the signees are medical professionals from the Harvard School of Public Health, American Cancer Society and University of Illinois at Chicago Division of Pathology Research.

All agree there is scant evidence to support Bayer's claim.

A seven-year, $118 million study funded by the National Institutes of Health found last year that selenium does not prevent prostate cancer in healthy men, the center said.

The Selenium and Vitamin E Cancer Prevention Trial involving 35,000 U.S. and Canadian men was halted in October when researchers determined that selenium was not protecting the men from prostate cancer and may have been causing diabetes in some of them.

According to the researchers in their letter supporting the FTC's complaint, "the federally financed study was the largest individually, randomized cancer prevention trial ever conducted, and, given its high rates of adherence and its statistical power, it is unlikely to have missed detecting a benefit of even a very modest size."

"Bayer Healthcare is doing a disservice to men by misleading them about a protective role for selenium in prostate cancer," they added.

All About Center for Science in the Public Interest • Prostate Cancer