LONDON, England (CNN) -- Couples in the African kingdom of Swaziland are being urged to get tested together as part of a HIV "love test" campaign. 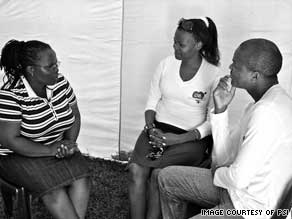 A couple discusses the love test with a PSI member. Before the campaign, only 2 percent of couples got tested.

The nationwide initiative -- funded by the United States government and implemented by global charity 'Population Services International' (PSI) -- is aimed at couples because tests can be useless if partners are not aware of the others' HIV status.

"If partners get tested separately, they may not disclose the results and not get the support they need," Dominic McNeill, spokesman for PSI Swaziland, told CNN.

Only one in four people -- mostly female -- know their HIV status despite the fact that approximately 26 percent of the population in Swaziland is HIV positive.

The charity says it also wanted to move away from the traditional HIV campaigning methods.

"We wanted to turn HIV on its head and move away from the fear-inducing campaigns we've seen in the past, which don't work. Instead, we focus on love, saying that it is love that should be contagious and couples should get tested together," McNeill explained.

Would you get tested with your partner? Tell us in the Soundoff below

But in a country where a macho culture still prevails, getting couples tested together has proved challenging.

McNeill said: "In Swaziland it is difficult to convince men to get tested as it makes them feel inferior."

PSI said it found that one of the most successful campaigning tools has been to directly target men in areas where they are often concentrated.

"We go to the places where men have their cattle disinfected and also work extensively in churches. We even have a testing facility in one of the countries' prisons" said Iulian Circo, PSI's country director.

Watch PSI in action in Swaziland

"Men are the head of the family and we try to get them to own up to that responsibility."

PSI Swaziland received $3 million this year from the United States' President's Emergency Plan for Aids Relief (PEPFAR) and has so far spent $35,000 on radio, TV and print advertisements.

Since the launch of the campaign in April, PSI -- which partnered with UNICEF and UNAIDS -- told CNN it has already seen a 25 percent increase in couple testing and a 400 percent in general testing year-on-year.

And neighboring countries such as Zambia, Mozambique and Namibia have already shown interest in the 'love test.'

The tests are also quick and free. Offered in facilities in the four regions of the country, they take only 45 minutes, including a 30-minute counseling session and on-the-spot results.

If results show one or both partners are HIV positive, PSI offers longer-term free counseling.

The HIV campaign is expected to last until the end of the year and the charity is also partnering with the Bill and Melinda Gates Foundation -- which has donated $50 million to fight aids in the region -- to promote male circumcision, medically proven to lower the risk of getting the HIV virus.