Life expectancy could be topic in health care debate

(CNN) -- Despite spending more money than any other country on health care, the United States does not lead the world in life expectancy, a long-known fact that some experts say could raise more questions in the health-care reform debate. 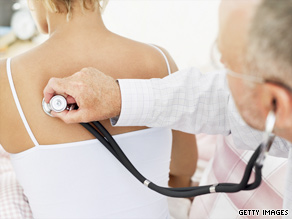 A study found that better-educated doctors increase the growth rate of life expectancy.

The United States ranks 50th out of 224 nations in life expectancy, with an average life span of 78.1 years, according to 2009 estimates from the CIA World Factbook.

Some argue part of the problem stems from the privatized nature of the U.S. health care system, whose reform is being vigorously debated on Capitol Hill.

"What we are able to find in the industrialized world is that life expectancy will be influenced in a beneficial manner to the extent that health care expenditure is publicly financed," said Harvey Brenner, professor of public health at the University of North Texas Health Science Center and Johns Hopkins University. "The higher the government expenditure on health care, the lower will be the mortality rate."

In countries where individuals pay for their own care, people often don't get treatment until their symptoms have become serious, Brenner said. There is also less emphasis on preventative care in those countries, he said.

An analysis by Bianca Frogner, postdoctoral fellow at the University of Illinois at Chicago's School of Public Health, supports the view that a single-payer system may be associated with higher life expectancy. The federal governments of countries such as Norway, Sweden, Denmark, Australia and Canada are the payers for the respective systems, and these countries have some of the highest life expectancies in the Organization of Economic Cooperation and Development.

"Inevitably the conversation about reforming our health care system focuses on the question of what are we getting for our money and how are others doing with their health care dollars. Life expectancy, along with mortality and morbidity rates, are fairly straightforward numbers to rely on," Frogner said in an e-mail.

A 2008 study in the Annals of Internal Medicine found that with the implementation of the Taiwan single payer systems, gain in life expectancy was slightly faster in the 10 years after reform than the 10 years prior to the reform.

But the issue for the United States is far more nuanced than simple comparisons to other countries, said Nicholas Eberstadt, researcher at the American Enterprise Institute, a Washington think tank. The population characteristics and risk behaviors for different regions should also be taken into account, he said.

While infant mortality rates in the 1980s and '90s were higher in the United States than in some Scandanavian countries, low birth weight babies had better survival rates in America at the same time, he said.

"The simplest hypothesis for this paradox is that at any given birth weight, especially at the critical high risk low birth rates, American babies got better access to medical care than Scandanavian babies," Eberstadt said.

Similarly, looking at five-year survival rates for cancer patients of any ethnicity, the U.S. generally beats European countries, he said.

"It makes one appreciate that you have to tread a little bit more carefully in accepting some of the broad generalizations about the health care system," he said.

Frank Lichtenberg, professor of business at Columbia University, said it's impossible to determine at this point what effect a single-payer system would have on life expectancy in the United States.

But medical innovation in general does benefit the rate at which life expectancy increases, he said.

His research has found U.S. states that adopt new drugs more rapidly, use more advanced imaging procedures, and have graduates from top medical schools, tend to have higher rates of life expectancy growth.

"The growth in life expectancy is primarily attributable to the quality of medical care," he said.

Countries with high economic growth and per capita income levels -- how much individuals earn of the money generated in the country annually -- tend to do well in terms of life expectancy, with notable exceptions, experts say.

With economic growth comes the capacity to invest in basic things, such as nutrition, sanitation, housing, health care, as well as sophisticated developments such as the promotion of safety and health in workplaces, as well as control of food and drug contamination, Brenner said.

"Virtually all elements of human well-being depend on some form of economic capacity, some form of financing," he said. Economic growth is "the bedrock of life expectancy," he said.

Economic growth does not necessarily determine a country's life expectancy, but "there's a broad international correspondence between health and wealth," Eberstadt said.

"Virtually every type of environmental contamination and occupational illness is in some way associated with industrialization," he said.

There are still countries in the world with a life expectancy well under 70, including much of Africa, some parts of Asia, and some parts of South America, Brenner said. Other factors counteract the positive effects of economic growth on longevity -- namely, an increasing birth rate, the HIV epidemic, and lack of access to pure water and sanitation, he said.

Not everyone agrees that per capita income level, also known as per capita gross domestic product, is a central driver of life expectancy. Frogner said GDP itself depends on the health of the population, so it's unclear what causes what.

"A good economy can probably buy you good health care, but then good health care can also produce healthy workers, who then produce more goods, and grow the economy. So, a little bit circular," she said.

At the level of U.S. states, Lichtenberg said he has not observed a correlation between per capita income and life expectancy growth.

A more observable determinant of life expectancy is obesity, he said. The increase in obesity between 1991 and 2004 may have reduced U.S. life expectancy by about six months during that period, he said.

"Americans would be living six months longer today than they currently are if obesity had not increased as much as it has since 1991," he said.