(CNN) -- A single gene, called MYH9, may be responsible for many cases of kidney disease among African-Americans, researchers say. 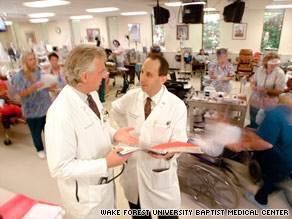 Although doctors have blamed hypertension for causing common forms of kidney disease in African-Americans, new research shows that high blood pressure may not be the chief cause.

"The MYH9 gene association in African-American kidney disease is the most powerful genetic cause of a common disease yet discovered," said Dr. Barry Freedman, professor of internal medicine and nephrology at Wake Forest University, who led a team of researchers in isolating the gene.

"This genetic finding will forever change the way that we categorize the causes of kidney disease. It has the potential to lead to new treatment options to prevent this devastating disease," Freedman said.

Kidney disease is a serious health issue among African-Americans, who have a fourfold higher risk of developing all common forms of it than whites in the United States.

Still, the gene has not been shown to be the sole cause of kidney damage, Becker said. Diabetes and hypertension remain the most common causes of chronic kidney disease in the United States, he said.

Genetic screening would be most useful for people who have close relatives on dialysis, meaning they are at high risk, or individuals who want to donate kidneys, he said. There have not been studies on who should be screened, he said.

Freedman conducted the research along with colleagues at the National Institute of Diabetes and Digestive and Kidney Diseases and the Family Investigation of Nephropathy and Diabetes Study.

The team discovered that the gene accounts for nearly half of kidney failure among African-Americans, including diabetic-related and non-diabetic-related kidney disease.

Researchers are now exploring what kinds of environmental triggers might cause the gene to promote kidney failure. HIV seems to trigger the gene and cause kidney failure, he said.

It is still important for people to treat hypertension, which can speed up the weakening of kidneys in people with kidney disease, Freedman said. Untreated high blood pressure also leads to heart attack and stroke, he said.

Dr. Michael Roizen, chief wellness officer at the Cleveland Clinic and author of "RealAge: Are You as Young as You Can Be?" said the question still remains whether the gene initiates hypertension and kidney disease, and to what extent hypertension causes kidney disease.

Becker also noted that researchers will have to sort out the interactions between the MYH9 gene and hypertension, as well as the gene and diabetes.

No one knows why African-Americans tend to have a higher risk for hypertension. One controversial hypothesis, known as the Middle Passage theory, is that black people who survived the harrowing trip across the Atlantic Ocean from Africa in the holds of ships did so because their bodies were better able to preserve salt, allowing them to avoid death by dehydration. Therefore, the theory goes, some African-Americans have a higher prevalence of "salt-sensitive hypertension": Their blood pressure increases by unusually high amounts in response to salt.

This theory has not been proved, or even widely studied, but the idea continues to permeate popular culture and generate discussion.

The isolation of the MYH9 gene does not necessarily refute the theory, Roizen said.

"To survive, they had to retain salt, and they had to have a gene to help them do that," he said.