(CNN) -- When rehab and Alcoholics Anonymous meetings didn't work for Eddie Freas, he sought another way to kick his 20-year drug and alcohol addiction. 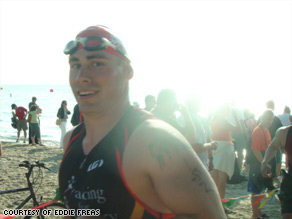 Eddie Freas fights drug addiction by putting all his energy into training for triathlons.

"I feel better when I'm working out," said Freas, 33. "It does wonders for the mind. The reason I started running -- it was a switch that went off in my head. I started feeling positive and feeling great about myself."

Freas spent his youth in pursuit of drugs. At the age of 13, he snuck bottles of Amaretto and rum from his mother's liquor cabinet. He also developed a taste for marijuana and cocaine. By his senior year of high school, Freas was kicked off the wrestling and football teams after failing a drug test.

Then in 2007, after a three-day binge, "I came home and was crying," Freas said. "I was so depressed. I turned on the TV." The set was tuned to ESPN, which was airing a story about a former drug addict who competed in triathlons.

The program's subject was Todd Crandell, who had lost a college hockey scholarship because of a drug addiction. After 13 years of using drugs, Crandell started competing in Ironman races and championed finding positive ways to fight addiction through his program called Racing for Recovery.

"Having an athletic background, I was drawn to getting back in shape," Crandell said. "It makes you turn intellectually and spiritually fit. Exercise is essential. It decreases addiction, depression and you use it as part of the recovery."

Freas was entranced by the parallels.

"His whole story seemed like mine," Freas said. "That's why it hit me so much. It was my story but it happened to somebody else. I knew I had to get back into fitness."

He took a bus to Racing for Recovery's office in Sylvania, Ohio. There, Freas said he learned to "stay clean and use other things -- fitness, instead of drugs." On his first day, Freas pushed himself to run 10 miles.

"It killed me," Freas said. "I was just motivated. I was sore for a week and I gradually got into it. As soon as I started including fitness into my everyday lifestyle, it made it so much easier. It kept me busy and because of the physical fitness, it was making me feel better about myself."

He pushed himself to run farther and raced in his first Ironman competition in 2008.

"It's different when you use drugs, you temporarily feel good and afterwards, you feel like doing more drugs," Freas said. "When you go for a long run and do physical fitness, you feel good doing it."

Research in animals and humans show that exercise can be a mild antidepressant.

"It isn't a huge surprise when you consider many positive effects exercise can have with regards to the brain chemistry: dopamine, serotonin, endorphin, epinephrine -- these are all associated with mood altering effects," said Dr. Cedric Bryant, the chief science officer for the American Council on Exercise. "If they're able to get this natural high, through a natural endeavor such as exercise, it allows them to replace the means to achieve that high with a more positive approach."

One study showed that women trying to quit smoking were more successful when they exercised. And the National Institute on Drug Abuse held a conference last year to explore the possible role of physical activity in substance abuse prevention.

"The thought centers around the release of mood-altering brain chemical, mainly endorphins," Bryant said. "It gives you euphoria or what you call 'runner's high.' "

Crandell said some people who battle drug addiction "want something more than sitting in support groups filled with smoke, complaining about drinking."

"I've had some of my naysayers from other programs who say you've taken one addiction and replaced it for another," Crandell said. "I've taken addiction and put into a new focus that includes exercise. Exercise for me is essential to my recovery and well-being."

The purpose of Racing for Recovery is not to turn everyone into an athlete, but to focus on positive pursuits in a person's life.

"Whatever you lost during your addiction, that should be your Ironman, not just running," Crandell said. "If your goal is to become a teacher, let that be your Ironman."

After Freas spent six months in Ohio, he returned to his hometown.

"I didn't want to come back home, because this was where I did all the dirt, all the partying and stuff," Freas said. "As time went on, I had to come back here. My life is turned around. I got to help people in my hometown."

Back in New Jersey, Freas helped train Dustin Deckard, 19, a former high school star wrestler, who is recovering from a four-year heroin addiction. Deckard wanted to get clean after a near-fatal overdose.

"I have to be clean the rest of my life," Deckard said. "Sometimes that overwhelms me. I just feel that sometimes it's not fair that other people can go out and have fun and drink and do whatever at a party. But me -- if I do anything -- it's off. I can't stop. I definitely have troubles with that."

Freas and Deckard have developed a brotherhood.

"I know how he was feeling, being down, not wanting to use drugs," Deckard said. "I just relate to him in every way. We both used. He's also into sports and into wrestling like I was. That's what's cool."

This Sunday, Freas and Deckard head to Racing for Recovery's half triathlon at Monroe, Michigan where the teen will race for the first time.

All About Addiction and Recovery • Drug Addiction • Triathlon