Why can't I concentrate?

Your desk is a mess, and you can forget about completing your to-do list -- you don't even have one. Your mind darts from one thought to the next. And that handbag you've been madly searching for on your way out the door? Yes, it's already on your shoulder. 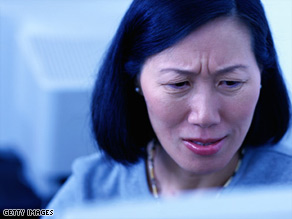 ADD is a neuro­behavioral condition marked in part by poor memory, inability to concentrate and fidgetiness.

Episodes of forgetfulness and distraction happen to all of us, and for most that's all they are -- episodes. But nearly 5 million American women have attention deficit disorder, or ADD, a neuro­behavioral condition marked by poor memory, the inability to concentrate on important tasks, and a tendency to fidget and daydream, among other symptoms. For them, this kind of distraction isn't temporary at all and can actually be crippling.

When adult ADD (or ADHD: the H is for hyperactivity) goes untreated for years, women may end up plagued by anxiety, depression, and low self-esteem. "They may feel as though they're constantly being judged -- as flighty, inept, late, disorganized, scattered," says Tracy Latz, M.D., a psychiatrist and associate clinical professor at Wake Forest University Medical Center. And even if women seek help, the condition may go overlooked or be misdiagnosed.

Because women are less likely than men to be classically hyperactive, their symptoms can be more subtle and easily missed. For instance, a woman with ADD may come off as chatty, peppy, or extroverted, or even as a dreamy, artistic soul. In reality, she may feel deeply frustrated by seemingly simple tasks, from picking out clothes to grocery shopping to keeping files organized at work. And her condition may lead to fights with her spouse or difficulty on her job.

Hormonal changes can exacerbate the effects of ADD, too. When a woman enters perimenopause, she may be even more likely to forget names or key bits of information. Health.com: The best memory boosters

The good news? When women do receive a diagnosis of ADD, many feel relieved to have discovered the answer to a frustrating question: "Why am I like this?" What's more, treatment usually brings greater productivity, better organization, and a newfound sense of control. Here, meet three women who have found their focus -- and learn how to get the help you need if you suspect you have ADD.

"Simply getting a diagnosis helped."

For years, Lacey Galbraith, 32, felt like a failure because she had to work so hard to focus on tasks that others seemed to breeze through. During college and graduate school, she gladly contributed to class discussions, but taking tests was agony. "I'd read the question, hear the person next to me breathing, think about the sandwich I was going to eat at lunch, agonize over the answer, think about the sandwich, then reread the question yet again," she says.

The struggle to stay focused continued into her working years and took a toll on Galbraith's self-image. She saw a therapist and was prescribed meds for depression and anxiety, but nothing helped. Despite her success as both a teacher and a writer, Galbraith says, "I was always on edge, afraid that I'd mess up." Health.com: Attention sappers: 5 reasons you can't concentrate

Experts believe ADD has a fairly strong genetic component. If one person in a family has the condition, there's a 25 to 35 percent likelihood that any other family member has it as well. (In the general population, the probability is only 4 to 6 percent.)

Sure enough, for Galbraith the breakthrough finally came last year after her mother was diagnosed with ADD at age 62 and brought home several books on the condition. As soon as she read the list of symptoms, Galbraith recognized herself. She raised the issue with her therapist, who soon confirmed her hunch. "He wondered why he hadn't thought of it before," she says.

The therapist then gave Galbraith a detailed questionnaire, part of the standard procedure in ADD diag­nosis. (Before a formal diagnosis of ADD can be assigned, most women also need a physical exam to rule out hyperthyroidism, which has some symptoms in common with ADD; in some cases, formal psychological testing is conducted.)

When Galbraith looked back to her childhood, she saw classic signs of ADD behavior, which helped to confirm her diagnosis. "ADD is a lifelong issue," Dr. Latz says. "If a person doesn't remember having any of the common signs usually seen in childhood, they likely do not have ADD."

Decades ago, ADD was infrequently, if ever, diagnosed. And as recently as the 1980s, experts believed that children with ADD would eventually outgrow the condition. Today, that thinking no longer holds true, and it's believed that up to 60 percent of children with ADD or ADHD will still exhibit symptoms as adults if left untreated -- which suggests that there may be a sizeable number of undiagnosed adults living with the condition. Health.com: Myths and misconceptions about ADHD

These days, Galbraith is able to fully concentrate on her work, thanks to a combination of therapy (she sees her psychiatrist every three months, which helps her work through any emotional issues and self-defeating thoughts) and a prescription for Adderall, a stimulant that, along with Ritalin, is the most commonly prescribed drug for ADD. "Putting a name to how I've felt all these years has been the biggest help in getting past it," she says.

This is common among women with ADD, experts say. "Many feel vindicated and validated after receiving the diagnosis," says Jon J. Markey, M.D., a psychiatrist with the Center for Human Development at Beaumont Hospital in Royal Oak, Michigan. And Galbraith's happy ending is not an exception: Nearly 70 percent of adults who are treated for ADD improve substantially, Markey says.

"Medication is my missing ingredient."

While Galbraith discovered that she had ADD because her mother was diagnosed first, it's more common for a parent to follow in a child's footsteps. "Many adults seeking help for their children recognize symptoms in themselves," Markey says.

Take Beth Reisman, 55, whose stepdaughter's fourth-grade teacher recommended that the child be tested for ADD. "Sitting through a battery of tests and interviews with Rachel, I realized I was silently giving the same answers she was," Reisman says. She recalled difficulty she'd experienced at one job: "I felt like a caged wild animal; I wanted to be up and moving around. My boss told me I wasn't cut out for office work." Health.com: Take the quiz: Could you have adult ADHD?

After her own testing, Reisman learned that many of her lifelong struggles -- the tendency to daydream, her impulsivity, her difficulty with reading, the way she couldn't seem to get organized, her constant fidgeting and inability to sit still -- could be explained by ADD.

Even her hypersensitivity to noises (as a child, she couldn't stand to hear people eat salad) was simply one way that the characteristic distraction of ADD is manifested. Instead of tuning out irrelevant sounds, Reisman tunes into them -- to the point that sounds actually seem amplified. "When I empty the dishwasher, the sound of silverware banging together in the drawer literally hurts my ears," she says.

Like many women with ADD, Reisman found that her symptoms worsened as she approached menopause. Today she controls her condition with a twice-daily dose of Adderall, which allows her to focus, stay organized, budget time effectively, and complete projects.

Reisman is in the majority when it comes to treatment methods for ADD. In one recent survey, more than 80 percent of adults with ADD said they relied on medication to help them manage their condition.

"If you make a cake and leave out an ingredient, the cake won't turn out right," Reisman says. "I feel the same way about Adderall. It doesn't suppress my appetite (I wish it did) or give me extra energy. It's just my missing ingredient, the thing that helps me stay on task."

For some women with ADD, the answer may not be therapy or meds, but a strict, self-imposed set of behavior changes. That's what worked for Desi Downey, 51, of Franklinton, Louisiana, who frequently drove herself -- and her family -- crazy by setting an object down in the wrong spot and then spending the next hour looking for it, starting projects that she'd never finish, and jumping from subject to subject in conversations. In her 30s, tired of being dismissed by friends, family, and co-workers as scatterbrained or "a typical blonde," Downey picked up Driven to Distraction: Recognizing and Coping With Attention Deficit Disorder from Child­hood Through Adulthood by Edward M. Hallowell, M.D., and John J. Ratey, M.D.. The book was a huge eye-opener, she says.

Though never formally diagnosed, Downey learned to function by using compensation techniques recommended for people with ADD. She makes numerous to-do lists, leaves sticky-note reminders for herself all over the house, and employs what she calls the "30-second rule:" "If I'm using the scissors and the phone rings, I answer the phone, but I don't put the scissors down. Then, no matter what, I take 30 seconds to put the scissors back where they belong. Otherwise, it will take me 45 minutes to find them the next time." Health.com: 4 steps to beating the fog of chronic pain

Downey found that she was able to incorporate these and other helpful behavioral changes into her life to reduce her ADD without taking drugs. Many therapists who work with people with ADD use similar behavior-modification techniques successfully. The majority of patients who use such strategies report improvement, Markey says.

In addition to working with a therapist, experts say that many adults with ADD may benefit from joining a support group, or working with an ADD coach to help manage problem behaviors and improve productivity.

Learning about ADD changed Downey's life. "I was relieved to discover that there's a legitimate reason for the way that I am," she says. "I never thought of ADD as something wrong with me. All I had to do was learn to manage it within the scope of my life, or manage my life within the scope of ADD. And I have."

All About Attention Deficit Disorders