WHO considers move to pandemic phase 6 for H1N1 virus

(CNN) -- The World Health Organization announced Tuesday it is still considering increasing its pandemic alert level to phase 6 because of growing worldwide cases of the H1N1 virus, or swine flu. 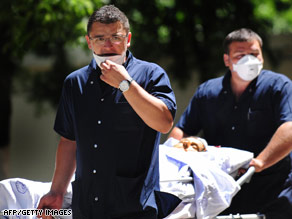 WHO considers raising the pandemic alert level to 6 as cases of H1N1 increase worldwide.

"Globally, we are at phase 5, but we are nearing phase 6," said Dr. Keiji Fukuda, WHO's Assistant Director General. "As this continues to spread internationally, some countries are moving from isolated to sustained community spread."

Phase 6 is a declaration that many member countries have long feared could mean economic disaster. It is the highest on the WHO's pandemic alert system, and is described by the organization as a global pandemic.

Fukuda was quick to remind journalists that the designation does not reflect the severity of the disease, but how widespread it is.

"Our overall assessment of severity is moderate," he said, "because although the overall number of serious and fatal cases is relatively limited ... we really don't have a full handle on the number of people with serious illness."

Fukuda said nearly 19,000 cases of the H1N1 virus have been reported in 64 countries, resulting in 117 deaths.