Jon and Kate plus hate? Ways to deal with common relationship stress

Although it may have been Jon and Kate Gosselin's unusual family that landed them a reality show, it is their marital problems-- to which much of their audience can likely relate-- that have made them a household name in recent weeks. 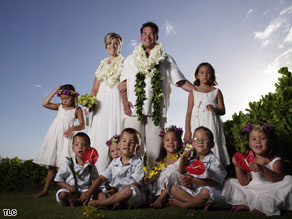 Jon and Kate Gosselin's marital problems have give their TLC show record-breaking ratings.

During the previous four seasons of TLC's Jon & Kate Plus Eight, the couple has bickered, eye-rolled, and jabbed its way through adventures in rearing now 9-year-old twins and now 5-year-old sextuplets. In this past Monday's record-breaking fifth-season premiere (9.8 million viewers), Jon and Kate finally addressed the very topic that has kept them on tabloid covers for weeks: Their marriage is on the rocks.

Even without the stress of eight children, rolling cameras, and public scrutiny, all couples encounter tension in their relationships. Below, five trigger points that have tested Jon and Kate in their reality-TV run -- and how to make sure the same stressors don't take a toll on your relationship.

Stress trigger No. 1: A growing family

Whether you're bringing home one new baby or six, expanding your brood requires adjustment.

Sleep deprivation can trigger depression and anxiety, said Dr. Ken Robbins, a clinical professor of psychiatry at the University of Wisconsin. New moms are also at risk for postpartum depression, and both parents will likely feel stretched for time. Health.com: 4 Myths about healthy sex

Then there's the issue of intimacy, which will undoubtedly be affected with children in the house. "Sex lives of people who have children are worse -- there's data to prove it," said Dr. Andrew Goldstein, an obstetrician and gynecologist at the Johns Hopkins School of Medicine and the author of Reclaiming Desire. "But a relationship is not like a job where you just have to accomplish what is necessary; you can't just put it on autopilot."

Smart solutions: Couples need to work together to find creative ways to support and appreciate each other through this transition.

• Adjust sleep schedules so that one partner sleeps while the other is awake with the baby.

• When possible, get a friend or relative to occasionally help out at night so mom and dad have some time to cultivate their relationship one-on-one. Especially as kids get older, make sure they understand that mom and dad need time to themselves.

• Be aware of the signs of postpartum depression like appetite changes, trouble concentrating, loss of energy, and hopelessness. Health.com: 6 Rules for a healthy postpartum slim-down

• Make activities that promote mental health -- such as exercise and social time -- a top priority.

Before Jon & Kate Plus Eight, the Gosselins worked like the rest of us-- she as a nurse, he as an IT consultant. But things have changed since their family morphed into reality-show fodder, with Kate parlaying her notoriety into a career that includes two books, television appearances, and publicity tours.

"Kate's career has taken off and I'm a bit lost," Jon told People magazine in April. Any couple going through a similar change -- whether one partner loses a job or takes on a new one-- can experience tension in the relationship.

Smart solutions: Couples should speak honestly and listen carefully to each other to see if a career change has affected their relationship.

• The partner who is earning less money may struggle with a diminished self-esteem and feel extra sensitive, while the other may feel resentful about being the primary breadwinner. But both partners need to respect the other's role and recognize their situation as shared. In the case of Jon and Kate, "the only reason she can do what she does is because he probably takes care of the kids while she's giving a lecture," Goldstein pointed out.

• Find family and friends dealing with this same issue. Talking about shared struggles can help couples gain perspective and give them a chance to feel good about using their experience to help others.

• If one partner is out of work, he or she should be encouraged to pursue a new skill set and stay intellectually and physically active. This will improve his or her role within the family and may open new doors in the future. Health.com: Help! My spouse has ADHD

Although most couples don't have extended family announcing their disapproval on national television, it is certainly not uncommon for couples to elicit criticism from relatives over how they're raising their children. When people come together as a couple, they bring their own family's rules and ways of doing things with them, said Robbins.

Smart solutions: Family members may have their own ideas about everything from how often you should go out to eat to what religion to observe to whether or not it is appropriate for children to appear on national television. And in all likelihood, both sets of grandparents may disagree. But you do not have to end up in a war over whose rules, if any, you will adopt.

• First, listen to your in-laws. But in the end, decide as a couple which rules and guidelines are in your (and your children's) best interest.

• Talk to each other. If one partner is under more scrutiny, it's important that the other listen carefully and that both talk about how they may be affected.

• Present a united front to your extended family. It is crucial that they know you stand together.

Stress trigger No. 4: You pick on each other

Kate has famously criticized Jon for breathing too loudly. He continually seems irritated by her neat streak. "When couples begin to argue over small things, it usually means they have not resolved a more important problem," said. Robbins.

Smart solutions: Since the partner who is doing the picking may not even be aware of his or her behavior, the onus in this situation is on the person who feels disrespected.

• In a calm moment, sit your partner down and ask him or her if there is something you have done that is troubling them. Be clear about why you feel mistreated and be specific in your examples.

• If you're the one doing the criticizing, first consider how much actual damage your partner's annoying habit can do, said Goldstein. "If your spouse is text messaging while driving, that's worth talking about. If someone slurps when they drink -- well, you have to weigh the cost of the criticism versus the change that you're going to get." Health.com: How to care for and cope with a bipolar spouse

• Don't give up. It may take some discussion to figure out what is really going on, but in the end it can prevent unnecessary and unproductive conflict.

The tabloids have been buzzing with reports of Jon's and Kate's alleged indiscretions, which they have both denied. But it raises a common question for many couples -- what constitutes an inappropriate relationship?

Smart solutions: Don't put yourself in situations that you're not comfortable discussing openly with your partner-- even if they don't technically involve cheating. Every couple has to develop its own definition of what is appropriate and what is not.

• Sit down and talk about what relationships were like in your family when you were growing up. Maybe you're comfortable with your partner going out for lunch at work with a member of the opposite sex, but not for happy hour. Be open about what feels "normal" to you.

• Don't be constrained by other people's ideas of what is right and wrong. This is a private matter for the couple to agree on.

• If a line has been crossed, you need to decide together if the marriage is salvageable. If both members feel that there is a possibility of working things out, seeing a professional can help you sort out the feelings you are left with and move past them.