(CNN) -- Amber Mori drives a forklift in a warehouse in Gaithersburg, Maryland. As a working mom, she's on the go 24/7. But twice a week, Amber transforms into "Cykosis," a fishnet-wearing, skatin' diva, who bumps and jabs her way around a roller rink. 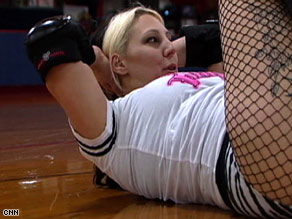 Amber Mori, aka: Cykosis, goes through a routine of sit-ups, pushups and stretches to improve athleticism.

Amber has been skating for more than a year as a member of the "Mason Dixon Roller Vixens" roller derby team. What started out as a lark has now become a passion for her. "I love it; it's a great way to get out, be invigorated -- and the companionship is wonderful," she says. "And I've got legs as strong as pythons."

Women's roller derby started as a professional sport in the 1920s, when teams criss-crossed the country, jabbing and jostling and duking it out for money and, eventually, the national championship.

By the 1970s, roller derby teams (and their fans) started to wane.

But with the resurgence of the extreme sports craze, women's flat track roller derby has made a comeback. Tired of pilates and Jazzercise, a lot of women started looking for more exciting outlets to stay in shape; the campy novelty of the sport piqued interest. Now, nonprofessional groups such as the Vixens are popping up all over the country.

Watch the Mason Dixon Roller Vixens do their thing »

The games became so popular that the Women's Flat Track Derby Association was established in 2004 to promote the sport by "facilitating the development of athletic ability, sportswomanship and good will among member leagues." Not all women's roller derby teams belong to the league, but the league hopes to offer rookie groups like the Vixens an opportunity to join.

Playing out of Hagerstown, Maryland, the Vixens started small -- only eight women. Now their roster has more than 20 names, from "Stun Hun" to "Squeaky Bomb" to "Fanny Harmher." The monikers, the costumes and the attitude are all in fun.

But the workouts are intense. Twice a week, the gals practice in order to stay flexible and in shape. Their coach, Travis "Groper Cleavage" McGlaughlin, puts them through sit-ups, pushups and stretches to improve their endurance. "They need to stay in shape," he says with a laugh. "Racing around the rink may look easy; it's not. It takes a lot of strength and stamina to just keep going."

Team Captain Jocelyn Bassler, better known to her fans as "Skid Ho," says roller derby is the best workout she's ever had. A former high school athlete, Bassler was looking for a sport to keep her in shape when she discovered the rink. "Why go to the gym if you have roller derby?" she asks.

Mori agrees. Since joining the group, she says she's dropped some weight and she's not surprised. According to sports medicine experts, an average-sized skater can use 400 to 1,000 calories an hour in competition, depending on how fast they skate. "At first I had a lot of toning in my legs," Mori says. "But since then, I think I've lost 16 pounds."

The women will also tell you that along with the thrill of victory comes the agony of bumps and bruises. They've suffered a couple of broken bones, swollen ankles and jammed fingers. So practice also includes drills to teach the women how to fall correctly. "Because if you're not prepared to fall, you just aren't playing the game," says Bassler. "It's tough, but I love it."

Dr. Stuart Willick, associate professor at the University of Utah Orthopaedic Center, knows it's tough. The university's sports medicine team provides on-site medical coverage for the Salt City Derby Girls of the Women's Flat Track Derby Association. "We have recognized that these skilled and dedicated athletes are at high risk for various musculoskeletal injuries," he says. "Furthermore, this population of athletes is generally underserved by sports medicine experts."

By studying how athletes get hurt, they hope to figure out how to prevent future injuries and keep derby girls safely rolling. "There is a lack of medical knowledge concerning roller derby injury epidemiology, treatment and prevention," says Willick. "We feel it's important to better understand injury risk among these athletes in order to improve treatment and prevention protocols."

Willick says his group has had more than 1,000 respondents to its electronic injury survey so far; he hopes to have the final results by summer. "The high response rate indicates that the athletes themselves feel that this is an important issue," he says.

The Vixens will agree: Roller derby can hurt and is not for sissies. But injuries or not, these divas will tell you there is no other game in town, and if they get knocked down, they'll just get up again and keep on rollin'.