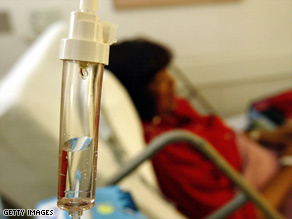 Chemotherapy may cause nausea, which may be alleviated through ginger, a new study says.

In the largest study of its kind to date, researchers found that a smidgen of purified ginger given in supplement form --equivalent to one-quarter teaspoon to one-half teaspoon of the spice each day -- could reduce chemotherapy-related nausea by 40 percent on the first day of treatment when used in combination with traditional anti-nausea medications.

The findings were released Thursday and will be presented later this month at the American Society of Clinical Oncology annual meeting.

"If we can reduce nausea on day one, then patients tend to have reduced nausea throughout treatment," says lead study author Julie L. Ryan, of the University of Rochester Medical Center in Rochester, New York. About 70 percent of cancer patients experience nausea during chemotherapy, although anti-emetic drugs often help prevent actual vomiting.

In the new study, 644 people -- mostly breast-cancer patients -- were given supplements twice a day for six days, including the three days before and after they started chemotherapy. The patients took 0.5, 1, or 1.5 grams of ginger daily, which was divided into two doses, or they took identical placebo supplements that contained no ginger. Ginger-taking patients -- regardless of daily dose -- reported a greater reduction in nausea on the first day of treatment than those taking a placebo. Health.com: 5 women battling treatment side effects

Those taking the two lowest doses of ginger reported greater relief than those taking the highest dose, however, so taking more of the spice isn't necessarily better.

"We were surprised to find that the lowest doses were the most effective. I am guessing that at one gram the gut reaches maximum absorption," Ryan says.

The reduction in nausea was substantial, she says. The patients taking a placebo reported about a four or five on a seven-point nausea scale, meaning they were extremely nauseated. In comparison, ginger-taking patients tended to report one or two, which is little to no nausea. The supplements reduced vomiting by roughly 5 percent in the study, says Ryan, but very few of the patients had any vomiting due to the anti-emetic drugs they were taking. Health.com: The medical tests every woman must have

"It's an interesting and rigorous study in the field of complementary medicine, and an important step forward in improving quality of care for the 70 percent of patients who undergo chemotherapy and experience nausea and vomiting," says Dr. Douglas Blayney, president-elect at the American Society of Clinical Oncology.

Prior research had suggested that ginger supplements couldn't reduce nausea during chemotherapy, but Ryan says timing is everything: By giving the supplement three days prior to treatment--which had not been done in previous studies--the anti-inflammatory property of ginger had a head start on quashing queasiness. Health.com: Why lymph nodes are a magnet for breast cancer

Studies have suggested that ginger can also quell nausea caused by pregnancy, motion sickness, and anesthesia.

Dr. Ted Gansler, director of medical content for the American Cancer Society, says complementary therapies such as ginger may work for some patients, but "most oncologists would not recommend counting on them as alternatives--especially for those receiving chemotherapy drugs known to cause the most severe nausea and vomiting." Health.com: I fought aromatase inhibitor side effects

If you're feeling queasy, Ryan says, consuming fresh ginger root from the grocery store can help, but purified capsules may work better due to their easier absorption in the gastrointestinal tract. In theory, ginger-containing products such as ginger ale, ginger snaps, and other products could reduce nausea, too, but only if they contained real ginger root, not just ginger flavoring.

Ginger has few side effects, but it could interfere with blood clotting and cause excessive bleeding, says Dr. Gansler. Consult your doctor before taking any supplement. Health.com: Being triple-negative made my breast cancer hard to treat

The study was funded by the National Cancer Institute.