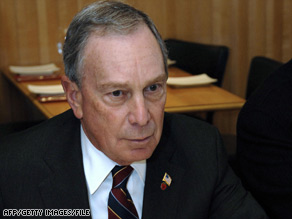 The city is temporarily closing the schools to "slow transmission" of the virus, Mayor Michael Bloomberg said.

The two intermediate schools and one primary school are in Queens, and all three will be closed for at least five days, the mayor said.

"We are closing the schools to slow transmission" of sickness, he said.

Bloomberg, flanked by New York Gov. David Paterson and New York City School Chancellor Joel Klein, said four students at one of the intermediate schools have the virus and an administrator was critically ill Thursday with H1N1. Bloomberg indicated the school administrator had a pre-existing medical condition. Fifty students at that school have been sent home with flu-like symptoms since May 6.

At the two other schools, the primary school had an overflowing nurse's office Thursday, reporting 29 students suffering from flu-like symptoms. The other intermediate school had 241 students absent with illness Thursday.

"There's always good communication, flu or no flu," Post said. "But our senses have been sharp for a while now."

The Health Department has seen a general increase in flu activity in Queens, officials said in a news release. While the symptoms of H1N1 flu seem to resemble those of seasonal flu, the H1N1 virus appears to spread more extensively, at least in schools, warranting closures to slow transmission in the community, the release said.

Dr. Isaac Weisfuse, the deputy commissioner of the city's Department of Hygiene and Mental Health, said although concern is legitimate, there's no solid evidence that suggests the H1N1 flu -- also known as swine flu -- is more dangerous than the flu in general.

"The bottom line is if you're sick, stay home," Weisfuse said. "And don't go back to school until you're better for one whole day."

In late April, St. Francis Prep, a high school in Queens, was closed because of a flu outbreak. Since then, the school reopened and the stricken students have recovered, according to the mayor's office.

"As we have said from the outset of the appearance of H1N1 in our city last month, we will share with New Yorkers what we know and not speculate on what we don't know," said Bloomberg in a statement.

The CDC said 4,298 cases of the virus and three fatalities have been confirmed in the United States as of Thursday night. New York had 224 confirmed cases of H1N1, the CDC said.

It was not clear whether the five cases cited by Bloomberg and the other New York officials were included in the latest CDC total.