Students can't be part of main graduation because of Mexico trip

(CNN) -- Dan Godshall and 21 other students at Slippery Rock University will not be allowed to graduate at their school's main ceremony because they recently visited Mexico. 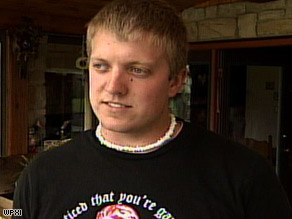 Dan Godshall was worried at first about telling his mother he wasn't able to be at the main graduation.

The students, who returned this week after student teaching in Mexico, came back to the United States early because they were worried the border would be closed and they'd miss out on walking at their graduation.

But now, they'll be walking in their own graduation, without any of their classmates, because the college feared they may have been exposed to the H1N1 flu outbreak in Mexico.

The students got the news from the school and received an e-mail from the university's vice president explaining the change.

"The university has received hundreds of calls from students and parents who were worried about being exposed at the commencement ceremonies," the e-mail said. "We have an obligation to protect others from what they perceive is possible exposure to this virus."

When he heard the news, Godshall was worried about how he would tell his mother that she wouldn't get to see him walk across the stage with the pomp and circumstance that everyone else will have.

"I thought my mom was going to freak," he said. iReport.com: How should we handle swine flu

Senior Ryan Brisini said at first when he found out that he couldn't walk, he was "a little irked."

"But we are a liability, and if you are going to try and do the best thing for the school and the entire graduation ceremony, we probably shouldn't be there," he said.

So Brisini and Godshall took the news in stride.

The 22 students will get a ceremony unlike anyone else in the school -- and the main graduation will see a video of their ceremony.

"It makes us a little distinguished from the group," Godshall said. "We were already the Mexican group, the swine flu zombies, now it gives us something positive and everyone has to watch our ceremony."

And with a small ceremony, only attended by the 22 students, their family and friends and university officials, senior Ryan Brisini thinks it will be more memorable.

"I think its kind of cool because when you are with people for an entire month you bond with them, and I can say I'm genuinely excited for everyone graduating, whereas at the main graduation I'd be with a bunch of kids I don't know," he said. "With this I can clap and cheer for everyone and genuinely be happy for them."

Still, some students are upset they will miss out on the grandiose day.

John Powell, who also went on the trip, told CNN affiliate WTAE-TV that the whole reason the group left early was so they could attend.

"It hits me a little bit. It's a necessary evil, separating us. I don't agree with it totally, but I'm not in too big of a position to overturn it," Powell said.

WTAE reported the university, in Slippery Rock, Pennsylvania, says it has received hundreds of calls from concerned people.

"There are concerns from the public perspective that they will be exposed," university spokeswoman Rita Abent told WTAE. "They may boo them. They may get up and walk out. And graduation should be a very respectful and a very celebratory time."

Cisco Junior College in West Central Texas is canceling Friday graduation ceremonies. Students will get their diplomas by mail, the college said.

"We understand that many will be disappointed by our decision," college President Colleen Smith said in a statement. "However, we believe that it is more important to protect our students, employees and families than to proceed with graduation ceremonies at this time."

Graduates at Northeastern University in Boston, Massachusetts, will get diplomas at commencement ceremonies Saturday but will have to live without part of the day's tradition.

"Since direct contact is one of the ways flu viruses spread, we have decided to forgo the traditional congratulatory handshake as you come forward to receive your diploma and have your photo taken with your dean," the school told students in a letter posted on its Web site.

Across the country thousands of elementary, middle and high school students are feeling the impact too.

At least four high schools have canceled their proms this weekend, including Park City High School in Park City, Utah, according to CNN affiliate KSL-TV.

Senior Kelly McGuire, who was getting ready for the prom on Saturday, is making last-minute changes because of the rescheduling.

"That's a bummer, because it means we have to try to cancel our limo," McGuire told KSL-TV. "All cancellations have to be a week in advance. I have to cancel my tux, my corsage. It's going to be hectic."

The Department of Education said that as of noon on Friday 433 schools, with a total of 245,449 students, in 17 states have been closed.

Fort Worth schools will be closed at least until May 12, authorities said, announcing that one student was confirmed to have swine flu. The closure affects about 80,000 students.

There, too, athletics were taking a big hit, Assistant Principal Dyan Gomez said. Rockville's teams were even banned from traveling to other schools to compete this weekend, she said.

All About Swine Flu • Education • Colleges and Universities