LONDON, England -- Two kisses on the cheek or three? The age-old dilemma may become moot as worries of infectious disease hang in the air. 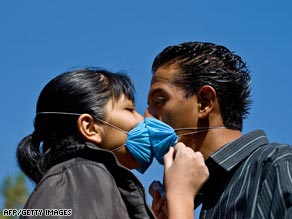 Common forms of greeting, such as handshakes and kisses on the cheek, are coming under scrutiny as the H1N1 virus, commonly known as swine flu, steadily spreads around the world.

In Mexico, which has had the largest outbreak of the virus, the Ministry of Health is advising people to avoid shaking hands and kissing people as a greeting.

Some couples are donning surgical masks when they kiss to avoid contagion.

Dr. Sanjay Gupta, CNN's chief medical correspondent who has been covering the epidemic from Mexico, is advocating the "el-bump," or bumping of elbows, as a greeting.

"It's not as cool as the fist bump, but safer," he wrote on micro-blog site Twitter. Follow Dr. Gupta's 'tweets'

Dr. Richard Dawood, medical director of the Fleet Street Travel Clinic in London, refers to the shift in etiquette as "social distancing."

"People don't want to get too close. There is going to be a move towards less handshaking, less greeting people with a kiss. There may well end up being fewer meetings," he told CNN.

The World Health Organization is advising people to practice preventive measures like avoiding close contact with people who appear unwell and those who are coughing and have a fever.

The global health agency is also directing people who live in areas where flu cases have surfaced to follow additional precautions set out by their national and local health authorities.

Even countries where the virus hasn't been confirmed are taking precautionary measures. At a news conference earlier this week, Lebanon's health minister recommended that people stop using the conventional greeting of three kisses to the cheek.

"We're heading toward a world where everyone is going to be suddenly much more conscious of those who are coughing and sneezing," Dawood said.

People will have to be much more conscious of hygiene and stay out of close proximity with others when they aren't feeling well, he said.

Are you changing your etiquette because of the swine flu epidemic? Tell us in the SoundOff below

The H1N1 virus is a hybrid of swine, avian and human flu strains. It is a respiratory disease that is contagious, and believed to be spread through coughing, sneezing and close contact.

Learn more about the virus »

Since the outbreak surfaced in Mexico, it has spread to at least 11 countries. The number of confirmed cases has reached 331, with the hardest hit areas in the western hemisphere, the WHO said Friday.

People tend to be scared of what they don't understand, especially when it comes to disease, Dawood said.

Watch Dr. Gupta report on a new scientific discovery about the virus »

He worries about how people will react as tensions rise. People historically have resorted to socially ostracizing those who have suffered from diseases like typhoid and leprosy, he noted.

The flu outbreak will pose another test. "Hopefully we don't see that again. We will have to control our urges in our relations to other people," Dawood said.

All About Swine Flu • Contagious and Infectious Diseases