(CNN) -- Doctors Without Borders has embarked on a massive vaccination campaign in three African countries to combat an outbreak of meningitis that has killed hundreds of people, the organization said Wednesday. 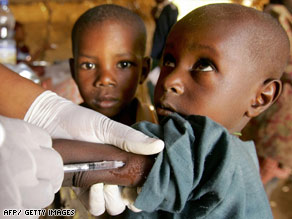 A child gets vaccinated against meningitis in Niger in August 2007.

The vaccinations are being carried out in Niger, Nigeria, and Chad -- part of a large swath of what is known as the "meningitis belt" of sub-Saharan Africa, the organization said. The "belt" stretches from Senegal to Ethiopia.

Doctors Without Borders, widely known by its French name, Medecins Sans Frontieres, said medical teams have treated and vaccinated 5.4 million people and plan on vaccinating another 1.7 million -- making the vaccination campaign the organization's largest ever.

The group said more than 1,900 people have died in this outbreak since January.

More than 56,000 cases have been reported in Nigeria, Niger and Chad alone, the organization said.

Last month, the World Health Organization said the disease was at epidemic level in 76 areas of in Niger and Nigeria, and a spokesman in Nigeria, Dr. Olaokun Soyinka, said the outbreak was "bigger than usual."

In March, the organization said a total of 24,868 suspected cases had been reported in the "meningitis belt," including 1,513 deaths.

The outbreak began around the start of the year, Soyinka told CNN. It usually peaks in the dry season because of dust, winds and cold nights, before dipping around May when the rains come, he said.

Meningitis is an infection of the meninges, the thin lining that surrounds the brain and the spinal cord, according to the World Health Organization. Several different bacteria can cause meningitis but Neisseria meningitidis -- which is to blame for the current outbreak -- is one of the most important because of its potential to cause epidemics.

All About World Health Organization