WASHINGTON (CNN) -- Over-the-counter painkillers and fever reducers will now carry new labels warning consumers of the potential risks of liver damage and internal bleeding associated with the drugs, according to a final ruling Tuesday by the Food and Drug Administration. 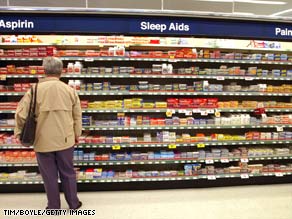 The new rule covers acetaminophen, the popular pain medicine also known as Tylenol, and a class of drugs known as nonsteroidal anti-inflammatory drugs or NSAIDs. The most commonly used NSAIDs include aspirin, ibuprofen (the main ingredient in Motrin and Advil), naproxen and ketoprofen. The modified labeling also applies to all products that contain these ingredients, such as cough and cold medicines.

Under the new rule, package labels and bottles must prominently state in highlighted text the drug's ingredients.

For acetaminophen, the label must include bold lettering warning patients about severe liver damage. The new labeling also instructs patients using the blood thinner warfarin to consult their doctor before using acetaminophen.

"Acetaminophen and NSAIDs are commonly used drugs for both children and adults because they are effective in reducing fevers and relieving minor aches and pain, such as headaches and muscle aches," said Dr. Charles Ganley, director of nonprescription drugs in the Center for Drug Evaluation and Research. "However, the risks associated with their use need to be clearly identified on the label so that consumers taking these drugs are fully aware of the potential harm they can cause. It is important that they know how to take these medications safely to reduce their risk."

The new labeling for acetaminophen also warns against taking multiple drugs that contain acetaminophen at the same time and exceeding the recommended dosage of the drug. And, it warns that drinking alcohol -- three or more drinks a day -- while using the painkiller can increase the risk of liver damage.

All About Food and Drug Administration • Pain Management