HONG KONG, China (CNN) -- Watching the news out of Mexico is causing a case of déjà vu for Dr. Lo Wing-Luk. 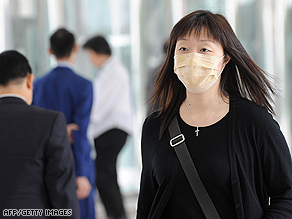 The sight of people wearing masks became common in Hong Kong after the SARS outbreak of 2003.

"Seeing the people in masks today reminds me of Hong Kong during SARS," said Lo, an epidemiology expert who was among those on the frontline during the outbreak of SARS in Hong Kong in 2003, which within three months infected 8,000 and killed nearly 800 in Hong Kong, China, Taiwan and Toronto.

Historically, Hong Kong has been center stage for recent infections that threatened to spiral across the world, such as SARS and Avian Influenza, which first struck and killed people here in 1997.

Southern China -- with the close proximity of its rural agriculture to population centers and globally connected transportation -- has been an ideal conduit for past animal diseases that spread to humans and then to the rest of the world.

But with the outbreak of swine flu in Mexico and the United States, Hong Kong suddenly finds the world looking to it for lessons on how to stop the spread of disease.

"Managing a (potential) pandemic can't be from the top down, it must be from the ground up," said Lo, a former Hong Kong legislator representing the medical community.

In the early days of SARS, cooperation was lax between Hong Kong health officials and public officials across the border in mainland China, where the live animal wet markets in Guangdong province is suspected in the virus' jump to humans.

"One of the most important lesson of SARS was the importance of good communication," says Dr. KY Yuen, head of the microbiology department of Hong Kong University, which found the first human cases of Avian Influenza in 1997 and first identified SARS in 2003.

"There were outbreaks in the middle to late November in Guangdong Province, but the first cases were reported in Hong Kong three months later," he said. "We could have reduced the impact (of SARS) if there had been better communication" between Hong Kong and mainland China health authorities.

The communication channels have improved between China and Hong Kong, health officials said, as well as better surveillance of the disease. Every visitor who comes through Hong Kong International Airport now is scanned by infrared monitors and immediately isolated if suffering from a fever or respiratory illness.

"Quarantine and isolation of people (suspected to be ill) is crucial now," Yuen said.

As the disease spreads, there is a conflict between the need for a quick response and the time required for appropriate scientific study -- which can result in some bad decisions, Yuen said. For example, in the case of SARS health experts wore full-body protection suits because of initial hunches the disease was being spread by airborne causes.

More people were exposed to the disease because of the harried medical staff's improper use of the cumbersome equipment. "It turned out globes, masks and hand washing were far more effective" than a breathing apparatus, Yuen said.

"Presumptions are dangerous," he added.

If Hong Kong is any example, governments who fail to meet the challenges of an outbreak will face rising public heat. In July 2003, half a million Hong Kong residents took to the streets to protest the government, in part because of frustrations over the response to the SARS outbreak, says Cecilia Chan, director of the Center of Behavioral Health at Hong Kong University -- adding to the woes of the already beleaguered administration of former Hong Kong Chief Executive Tung Chee Wah, who later stepped down in the middle of his second five-year appointment.