(CNN) -- As reports of swine flu continue to rise in the United States and around the world, the average American is probably asking, "How should I protect myself?" 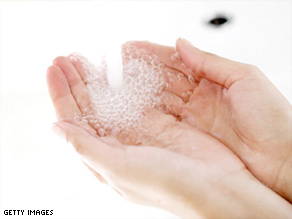 Health officials' advice is to follow common-sense precautions: Wash your hands, stay home if you're sick and listen to your local health authorities.

"Very frequent hand-washing is something that we talk about time and time again and that is an effective way to reduce transmission of disease," said Dr. Richard Besser, acting director of the Centers for Disease Control and Prevention.

"If you're sick, it's very important that people stay at home. If your children are sick, have a fever and flu-like illness, they shouldn't go to school. And if you're ill, you shouldn't get on an airplane or another public transport to travel. Those things are part of personal responsibility in trying to reduce the impact. "

So far, Mexico has been hardest hit by swine flu. Cases have been confirmed in the United States, as well as countries including Canada, New Zealand, Spain, United Kingdom, and Israel.

"In areas with no disease yet, a lot of what we can do sounds simple and repetitive but helps," said Dr. Anne Schuchat, interim deputy director of the CDC's Science and Public Health Program. In addition to washing hands often, she recommends covering your mouth when coughing and sneezing and avoiding touching your eyes and nose in case the virus is on your hands.

See your doctor if you have:

The CDC expects U.S. numbers will grow and recommendations will change depending on what happens in individual communities, said the CDC's Schuchat. The public should pay attention to what is happening nearby and heed the guidance of local health officials regarding school, work and public events.

Because so much is still unknown at this point, the main risk factor is people traveling to areas where cases have already been identified. "However this virus may already be in other places in the United States," CDC spokesman Tom Skinner told CNN. "With enhanced surveillance, we will see more cases and that is why it makes good sense to be proactive, by doing things we know are effective in reducing exposure."

Schuchat noted swine flu symptoms are relatively general and nonspecific. "So many different things can cause these symptoms. it is a dilemma," she said. "It is a challenge that we are wrestling with. There is not a perfect test right now to let a person or doctor know exactly what this is."

But Schuchat specifically advised anyone who feels ill after returning from Mexico to see a doctor.

Unfortunately, since this is a new strain of influenza, the flu vaccine for this past flu season offers no protection. "However, we do have anti-virals that work against this swine flu," said Skinner, referring to oseltamivir (Tamiflu) and zanamivir (Relenza). "Someone who has [swine flu], if they are treated early, the anti-flu medicines work against this."

According to Skinner, health officials are still trying to figure out where exactly the virus originated, how transmissible it is and why it is mild in some cases and deadlier in others.