(CNN) -- More than 5,000 patients of a South Dakota urology clinic may have been exposed to hepatitis and HIV when the facility reused single-use medical products, state health officials said Friday. 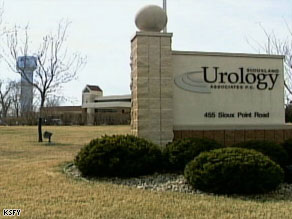 Clinic workers told inspectors they've been reusing products since the clinic opened its doors in 2002.

The Siouxland Urology Center in Dakota Dunes has been ordered to contact nearly 5,700 former patients treated there since 2002.

A routine inspection found the facility was reusing sterile saline bags, tubing and other medical supplies from cystoscopies -- a diagnostic procedure that looks at the lower urinary tract.

"We witnessed the practice while we were in the facility," during a January inspection, said Barb Buhler of the South Dakota Health Department. Siouxland Urology has since been put under a provisional license and has been very cooperative, according to state officials.

"Siouxland Urology Center informed certain of its patients by U.S. mail that a prior cystoscopy procedure could have potentially exposed them to an infectious disease," the facility's Web site said. It added that "the risk of infection from our past procedure is very minimal and we are unaware of any blood infections in our patients caused by the cystoscopy practice."

The clinic, which primarily serves clients from South Dakota, Iowa and Nebraska, is offering free blood tests to those possibly affected to rule out the presence of viruses

The inspectors, who are registered nurses, questioned the clinic staff. The clinic staff said they routinely reused saline bags and tubing, although both are clearly marked "for single use only," Stahl said.

"They used the bags and tubing on multiple patients," Stahl said.

He said the workers at the clinic told the inspectors they'd been reusing bags and tubing since the clinic opened in 2002. They said they didn't see anything wrong with the practice, Stahl said.

He said that the clinic had been inspected seven times since it opened, and no one had noticed that the clinic was reusing equipment. "It was just by chance that this saline bag was hanging there. We run across these things by luck at times," Stahl said. "We're fortunate that the team was able to identify this."

Fluids from patients can retreat into saline bags and tubing while the equipment is used, and reusing the tubing or saline bags could put patients at risk for contacting diseases from previous patients.

A 1-liter bag of saline and tubing costs about $4, according to Mary Jo Lallis, account manager for PSS World Medical, Inc., a medical supply company.

CNN's Greg Morrison and Elizabeth Cohen contributed to this report.

All About South Dakota • Hepatitis • HIV and AIDS