'Crack was my friend,' ex-addict says

ATLANTA, Georgia (CNN) -- Crack-addicted Felicia Anderson was pregnant with her third child when an ultrasound changed the direction of her life. 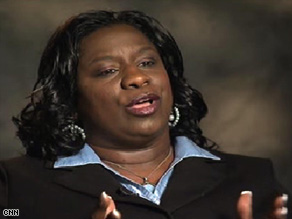 "You could hear that baby's heartbeat strong and steady. Really, that's her personality today, a strong, vibrant little girl. And at that time, laying there, tears starting rolling down my face," Anderson, 44, recalled.

In that moment, Anderson vowed to stay off drugs, something she'd been unable to do in more than a decade addicted to crack cocaine, even when she was pregnant with her first two children.

Anderson didn't think she could do it alone, so, like almost 2 million Americans a year, she entered a treatment program. Anderson spent three weeks in residential treatment -- all she could afford -- but didn't think that was enough, so she enrolled in Mothers Making a Change, a year-long outpatient drug and alcohol program in Atlanta, Georgia.

Three times as many Americans choose outpatient treatment as residential treatment, or rehab. It costs less, is more likely to be covered by insurance and does not require participants to leave work or their families for a month or more.

The outpatient program Anderson chose, Mothers Making a Change, is designed especially for pregnant women and women with young children. Anderson was both. At the time, her oldest daughter, Sierra, was 5; her middle child, Anicia, was almost 2.

Dr. Sanjay Gupta follows a mother, a writer, a student and a husband -- each an addict on a journey through recovery and relapse.
Sat & Sun, 8 p.m. ET on CNN

"I can say with everything in me, with every bit of my breath, that program helped me turn my life around," said Anderson, who now runs a program to help the developmentally disabled in DeKalb County, Georgia.

Interactive: Addiction and the brain »

Like most programs, residential or outpatient, Mothers Making a Change is built on the 12 steps pioneered by Alcoholics Anonymous. Among them: Admit you're powerless over your addiction, and turn your life over to a higher power.

"It's important in my opinion to have a connection with your spiritual world, your higher power," Anderson said. "So I thank God, first of all, for giving me a second chance in life."

Anderson began drinking and smoking marijuana in high school. She moved on to snorting cocaine and then smoking it. She said her drug use began spiraling out of control when her husband, an Army infantryman, committed suicide after returning from Operation Desert Storm. She said the crack numbed her pain.

Anderson tried to hide her addiction, but the lies became harder to maintain. She lost weight. She couldn't keep a job. And she began stealing to keep her children clothed and fed and to support her habit. She even stole their Christmas presents.

"The gifts would be under the tree, and I needed some crack, and I would take whatever present was there," Anderson recalled.

Anderson said she even smoked crack as she went into labor with her second child.

Caught shoplifting repeatedly, Anderson said, she was facing a five-year prison sentence in Maryland for violating probation when her brother Brian Robinson intervened. He convinced the judge to let Anderson and her two daughters come to Georgia with him and to let his sister check into rehab instead of going to jail.

Like many addicts, Anderson hit rock bottom before seeking treatment. Counselors and others say most addicts get help only when they get in trouble at home, at work, with their health or with the law.

Anderson went for her ultrasound and had an epiphany.

"Something inside me -- and I would say it's the voice of God -- saying, 'You can do this.' And laying there at that moment, I did say to myself, 'I can do this. Let me try to do this.' That was a turning point for me," Anderson said. "That baby that was born was born drug-free."

Anderson said that she has been drug-free for 12 years and that she's lucky: Her older two children did not suffer any health consequences from her addiction.

Anderson now has everything she had lost for a big part of her adult life: a stable home life, a job. Also, she's engaged.

"There's all kinds of beautiful things happening for me and my daughters right now."