MONT TREMBLANT, Quebec (CNN) -- Natasha Richardson came to Mont Tremblant ski resort in eastern Canada last month for what was supposed to be a skiing getaway. 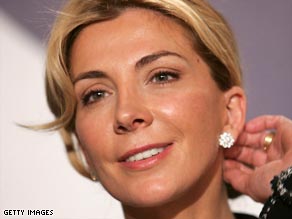 Actress Natasha Richardson died after suffering an epidural hematoma in a fall during a ski lesson.

But what she may not have known is some doctors have been arguing that if a person here is in need of urgent care at a medical trauma center, he or she may not be able to get there fast enough. The only way to get to the closest trauma center from here is to drive 2½ hours to Montreal. No helicopter medical service is available.

The Canadian newspaper The Globe and Mail obtained 911 recordings from Monday, March 16, when Richardson fell on a beginners slope on a sunny, clear day at the resort. The first request for help came in at 12:43 p.m., an urgent call that a woman had fallen on the slopes. That woman was Richardson. Seventeen minutes later, at 1 p.m., an ambulance arrived, but Richardson had been able to walk away from the fall and was headed back to her hotel room.

Ten minutes later the ambulance was told to stand down, the call canceled.

What Richardson couldn't have known is that she suffered an epidural hematoma. It's a condition where a blood clot forms between the skull and the outer layer of the brain. Too much pressure can cause brain damage and even death. Symptoms include dizziness, headaches and nausea.

"The person seems to be fine and walks it off, and that's one of the problems with an injury such as this," said Dr. Liam Durkan, a neurologist with the Montreal Neurology Institute. "Anytime there is any sort of process expanding in the skull, which is a closed space, once the symptoms are apparent, it can be a matter of 30 minutes to an hour to 90 minutes before there is a major deterioration."

Natasha Richardson didn't get to a trauma center for hours after her accident. Would a helicopter have made a difference? Dr. Sanjay Gupta investigates.
Thursday at 10 p.m. ET.

Two hours after her initial fall, while Richardson was back in her hotel room, she was feeling the symptoms. The clock was ticking and she needed to get to a trauma center fast. With the closest trauma center 2½ hours away, time may have been running out on her. It's recommended that anyone with an epidural hematoma get to the trauma center within 30-90 minutes.

At 2:59 p.m., another ambulance was dispatched to the resort. This time, the paramedics went inside and worked on Richardson for 33 minutes before transporting her to the closest hospital an hour away, but it is not a trauma center. Inside the ambulance, Richardson drifted in and out of consciousness.

"It is a rapidly deteriorating situation and the distance might have been just too much by ambulance, road ambulance or air ambulance. It's difficult to say," said Durkan, who did not treat Richardson. Depending on the severity of the injury at the time, he said, even helicopter services may have been too late.

Some trauma doctors have argued for air transport here since the mid-1990s. They say the safest and fastest way to move anyone suffering a trauma injury such as Richardson's is by helicopter. Helicopter transport is common practice in the United States and other areas of Canada. But in the Quebec region, very few places have access to air transport.

In an open letter to the citizens of Quebec sent to the Montreal Gazette, Dr. Michael Churchill Smith, director of professional services at the Montreal General Hospital, said incidents like Natasha Richardson's should serve as a wake-up call to Quebec. "It is no longer morally acceptable for our citizens who, in the moment of their greatest needs, do not have access to a rapid transit system that gives them the best chance to not only survive, but to survive with a quality of life."

Daniel LeFrancois, director of Quebec's pre-hospital care, told the Gazette that cost is prohibitive when a one-hour flight costs $6,000. It's a question of resources and priorities focusing on "the biggest gain for the biggest need," he said.

Richardson was taken from Mont Tremblant to a hospital in St. Agathe, which does not have the facilities to help someone with a severe head trauma. Richardson was transferred to the trauma center in Montreal about 7 p.m., more than six hours after her initial fall. Twenty-four hours later she was flown to a New York hospital, where she was taken off life support and died.

No one can answer the question whether a helicopter service could have saved Richardson's life. She refused services immediately after her fall, but with the clock ticking immediately after she felt symptoms from her injury, 2½ hours may have been too far away even if she'd gotten help immediately.