Heart disease on the rise in India

(CNN) -- Hindu priest Pandjitee is not overweight, does not smoke or drink and follows a strict vegetarian diet. Yet three years ago he was suddenly struck by a heart attack. 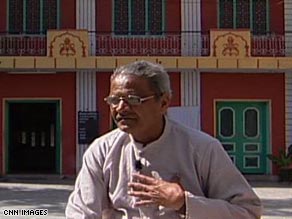 Hindu priest Pandjitee is a carrier of the genetic mutation that causes heart disease in India.

Pandjitee is among a growing number of Indians who are at risk of heart disease because of a genetic mutation that affects one in 25 people in India.

The mutation almost guarantees the development of the disease and Indians suffer heart attacks at an earlier age, often without prior symptoms or warning.

Now researchers say India, a country with more than one billion people, will likely account for 60 per cent of heart disease patients worldwide, by 2010.

A study among Asian Indian men showed that half of all heart attacks in this population occur under the age of 50 years and 25 percent under the age of 40, according to the Indian organization, Medwin Heart Foundation.

The major causes of heart disease are tobacco use, physical inactivity, and an unhealthy diet often linked to the developed world.

So in a country that traditionally frowns upon smoking and embraces the idea of a vegetarian diet, it was unexpected to find such a high percentage of the disease.

Researchers had long been aware that heart disease, which according to the World Health Organization will kill almost 20 million people by 2015, is exceptionally prevalent in the sub-Indian continent.

But it is only recently that scientists discovered the gene responsible. The research, published in January in the journal Nature Genetics, explains how a genetic mutation affecting four per cent of Indians and one per cent of the world's population, leads to a formation of an abnormal protein.

This protein often results in cardiomyopathy, a disease that causes deterioration of the heart muscle.

Genetic mutations found within specific communities are nothing new. There has long been talk of Ashkenazi Jews and Hispanic women, for example, being at higher risk of developing breast cancer. Scientists in 2007 identified that a certain gene mutation was prevalent in both communities.

However, most Indians don't know they are carrying the disorder, because access to testing facilities is not widely available.

But Dr. Chandry, an Indian cardiologist, told CNN he is not sure whether testing would really help.

"Right now we don't know, [whether it would help] because we don't know how to treat this. So this information is really very preliminary and the real impact on the population is still not known."

Chandry added: "As cardiologists, we can't really do population based measures, but we go out to the community and hold regular check-up camps, ... teach them what to eat."

Another problem in India is the lack of cardiologists in many cities to treat patients once they have developed heart disease.

But there have been signs of progress. Four years ago, there was only one cardiac catheterization lab in Haryana; now there are four.

Batra Heart Care Center is very small, but is only one of the four centers equipped for detecting and treating coronary artery disease, including operations involving the insertion of catheters into heart vessels.

Anouk Lorie contributed to this report