FDA: Hang on to your pistachios

WASHINGTON (CNN) -- If you have a stash of pistachios in your house, pistachio ice cream in your freezer or trail mix in your backpack, don't eat any of it. 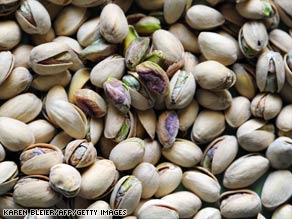 The FDA says it and the California Department of Public Health are taking "a proactive approach."

Kraft Foods Inc. notified the U.S. Food and Drug Administration last Tuesday that it found salmonella in roasted pistachios during routine testing. The nuts were traced to Setton Farms in Terra Bella, California, about 75 miles south of Fresno.

Setton announced a recall, Kraft removed its Back To Nature Trail Mix from store shelves, and Kroger -- a grocery chain with stores in 31 states -- recalled Private Selection shelled pistachios from its retail stores. See the FDA's complete recall list

"Ultimately, the question is what should consumers do, and our advice to consumers is that they avoid eating pistachio products and keep checking the FDA Web site for the latest information," Acheson said.

Watch why it's important not to eat the nuts »

An investigation is under way into how the pistachios came to carry the bacteria. Salmonella can cause serious and sometimes fatal infections in young children, frail or elderly people, and others with weakened immune systems.

Acheson stressed at a news conference Monday that the potential problems with pistachios were unrelated to this year's recall of peanut products, including peanut butter.

The pistachio investigation also involves the California Department of Public Health and the Centers for Disease Control and Prevention in Atlanta, Georgia.

Setton Farms told the FDA that it anticipates recalling about 1 million pounds of products nationally in the next few days, which covers its crop output last year.

Several people have told the FDA that they suffered gastrointestinal illnesses after eating pistachios, and the CDC was doing a genetic analysis, looking for any link between the people and salmonella strains, Acheson said. He said there could be some results by the end of the week.

He said the FDA is "ahead of the curve" in the current investigation.

"I want to emphasize that this recall was not triggered because of an outbreak, in contrast to some of the previous situations, for example, like the peanuts where people were getting sick and it was determined that peanuts, peanut butter was the likely cause," Acheson said.

"This is a situation that the recall is being triggered because of ... action taken on the part of the food industry," he added.

"What we're doing here is getting out ahead of the curve. It's a proactive approach by the FDA and the California Department of Health."

Jeff Cronin, spokesman for the advocacy organization Center for Science in the Public Interest, had a mixed reaction to Acheson's comments.

"I think it's partly the case," Cronin said. "It's good that the FDA is proactively issuing advice to consumers."

But "this still begets the question of 'how did this contamination happen in the first place?' Is this an isolated problem, or are we going to be hearing the same kind of horror stories that we heard about ... the company that produced the peanuts?"

He said he wondered when was the last time the FDA visited Setton Farms and whether it had known of problems there.

In February, the Texas Department of State Health Services ordered the recall of all products shipped from the Peanut Corporation of America's plant in Plainview, Texas, after discovering dead rodents, rodent excrement and bird feathers in the plant.

The company's peanut butter and peanut paste products produced at its plant in Blakely, Georgia, were linked to a nationwide outbreak of salmonella poisoning that affected 600 people, nine of whom died.

According to state health officials and many experts, the deadly outbreak of salmonella was fueled by poor oversight by food safety regulators and a slow response by federal agencies.

The first problem is that almost nothing can stop companies from shipping contaminated food, William Hubbard, a former FDA associate commissioner, told a U.S. Senate committee in February. He also said there are not enough federal inspections.

Other critics said the FDA stepped in too late in the peanut case to prevent a bigger problem.

Food safety experts say the underlying cause of the problem is that the century-old system of regulation is broken. In the peanut case, the experts say, the federal government failed to oversee the safety of products coming out of the Blakely plant and was slow to identify it as the source of the salmonella.